Drivers to first be warned then issued a fine 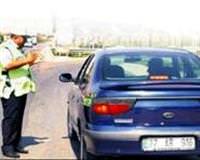 According to new Police Department regulations, traffic police will no longer be allowed to issue traffic tickets to vehicle license plates. Drivers will be stopped and told of their error, should they repeat the same mistake they will be issued a fine.

The Department of Police is taking action to prevent the infringement of traffic laws. The Department of Traffic Services has initiated a new process for issuing traffic fines after reaching the conclusion that the previous method in which traffic police officers would write tickets issued to license plate numbers without addressing the actual drivers was not increasing obedience of traffic regulations. According to the new method, should drivers violate the Highways Traffic Laws 116th item, traffic officers have been asked to not simply write tickets out to license plate numbers without speaking to drivers. Instead, from here on out drivers will be stopped and told of their discrepancy.
CIRCULAR SENT TO 81 PROVINCES
According to Assistant Director of Police in Charge of Traffic Osman Karakuş, a circular, detailing the new procedure has been seen to 81 different provinces.
Osman Karakuş states: "The fact that it is more effective, when processing drivers who have violated a traffic regulation, to inform them of the risks of their actions will be taken into consideration. It is crucial to place importance on informing drivers of their errors while processing them whenever possible."
In regards to the new procedure, Karakuş went on to state, "The issue will be tracked by the Police Department and in the case of our personnel not acting in compliance, the necessary legal measures will be taken."