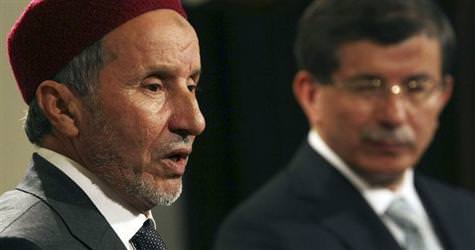 A major Muslim partner in NATO, Turkey earlier this month proposed a timetable for a ceasefire that could allow a political transition to take place.
"During this transition process a ceasefire should be established and Gaddafi should leave the leadership," Davutoğlu told a joint news conference with Mustafa Abdul Jaleel, head of the Libyan national transitional council.
Davutoğlu said the council is "a legal and credible representative of the Libyan people".
A Turkish foreign ministry official told journalists after the news conference that this did not mean Turkey recognized the council as sole representative of the Libyan people.
Jaleel, who also met Prime Minister Tayyip Erdoğan and President Abdullah Gül, said Turkey's proposed road map encapsulated the Libyan people's demands, including for Gaddafi and his family to leave.
He said Turkey's involvement disproved Gaddafi's claims that NATO's actions in Libya were part of a Western crusade.
"The main aim of this operation is to protect civilians," Jaleel said. "This is not a crusade." "Our objective is a political solution for the bloodshed to stop, but that depends on the condition that Gaddafi and his family leave."