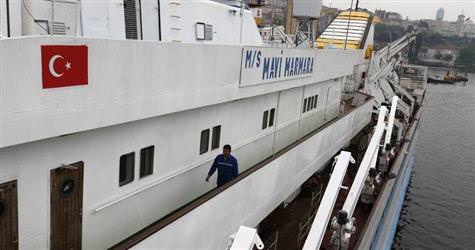 Five hundred thousand application forms have been submitted in order to join the second flotilla headed for Gaza. That figure may reach one million.

variety of nations have practically completed all the necessary preparations for departure.
According to IHH Humanitarian Relief Foundation Executive Board Member and Spokesman for the 2nd Flotilla Hüseyin Oruç, the Mavi Marmara vessel, which was subjected to a violent raid by Israeli forces last year, will be amongst the flotilla departing.
"We have run out of all 500,000 application forms. We received over 15,000 applications on the first day alone. There are almost one million people, including women and men of all ages that want to take part. However, there will only be 100 people travelling on the vessel."
Stating that the flotilla will be departing in the final week of June, Oruç explains that there will be a total of 15 vessels transporting 1,500 people to Gaza from a variety of countries. Mentioning that Israeli civil society organizations are currently engaged in an intensive policy of intimidation to stop the aid flotilla, Oruç states "this is a civilian movement and Israel cannot obstruct us. With the attack on the Mavi Marmara, a very serious crime was committed and the entire world was witness to this. We will be conducting this trip no matter what; we will not change our minds."