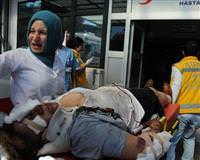 A bicycle bomb wounded seven people including a police officer in Istanbul on Thursday, the city's police chief said.

The blast occurred near a bus stop in Etiler, a residential and shopping district, at the end of the morning rush hour in Turkey's biggest city, just before 9 a.m.
Turkey is due to vote in a parliamentary election on June 12. Security forces are on edge as there has been a rise militant activity with attacks on police in recent weeks related to a long-running Kurdish separatist insurgency.
Police chief Hüseyin Çapkın said an electric bicycle with the explosive device planted on it was left close to a nearby police technical college.
"The explosive was not a large scale bomb, not very light either, we can say it was a medium sized bomb," Çapkın told reporters at the scene.
Prime Minister Tayyip Erdoğan's AK Party is expected to score a comfortable victory in next month's vote to win a third consecutive term in office, having first come to power in 2002.
Erdoğan has said he will re-write Turkey's constitution if he is re-elected, to replace one drafted in 1982 under military tutelage following a coup two years earlier.
"The aim of the attack is to prevent Turkey from discussing democracy, elections, a new constitution," said Suat Kılıç, a parliamentarian from the ruling AK Party. "Terrorist organizations carry out these attacks before every election." "The attack aims to prevent AKP from gaining enough seats to change the constitution," Kılıç said.
Çapkın said none of the wounded were in a critical condition, however a news channel quoted Istanbul's provincial health manager as saying two had serious injuries.
Television images showed one young woman being stretchered to an ambulance with an oxygen mask covering her face.
"We thought the building had collapsed. I even thought that a plane crashed into the next garden. Everybody was in panic," Ilhan Kurt, a pharmacist, told Reuters.
Watching from his shop across the road he saw a handful of people getting off a bus that had been passing by when the explosion occurred.
"Some people were holding their ears, who I think were injured. Three or four people got out of a bus." The site of the blast was cordoned off as white-suited forensic teams combed the area, with droves of police cars and ambulances parked nearby.
According to a resident living nearby, the explosion happened around 9 a.m. "It wasn't like gunfire. It was like an explosion," witness Tuncay Ozdemircan recalls. "When I looked out of the window I saw yellow and white smoke rising, and I thought that it was a bomb," he said.