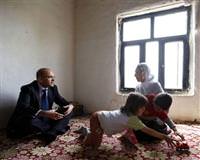 Unable to get a job in Istanbul, 26-year-old Kemal came home to Batman and now hopes another returning son can bring some of western Turkey's prosperity to the conflict-ridden Kurdish southeast.

Since Mehmet Şimşek, Turkey's 44-year-old finance minister, left in the mid-1980s to go to Ankara University, his hometown has become known for incidents of Kurdish militancy and for a high number of unexplained suicides among women and girls.
Aside from the three-decades-old separatist conflict that has taken 40,000 lives, the other great blight on the area is rampant unemployment.
"All we want is new jobs, and this is what Şimşek is promising," said Kemal at a rally where the minister was speaking.
A clean-cut young man from a family of subsistence farmers, he wants to believe Şimşek. Otherwise the only paid work he can find is as a seasonal labourer in the fields.
Şimşek is campaigning for one of Batman's four parliamentary seats in June 12 elections, after switching his candidacy from another southeast town where he won a seat in 2007.
He is one of the core members of a cabinet closely identified with Turkey's economic success along with Deputy Prime Minister and Economy Minister Ali Babacan and recently retired central bank governor Durmuş Yılmaz.
If opinion polls are correct, Prime Minister Tayyip Erdoğan's AK Party is set for an easy election victory and a third term, thanks in good measure to its success in transforming Turkey into one of the world's fastest growing economies.
It clocked 8.9 percent growth in 2010, and 4.5 percent is the government's conservative forecast for this year.
Almost every indicator shows Turkey on the up and up, but the numbers mask stark regional imbalances and while unemployment has fallen, in February it was still 11.5 percent. The number of jobless in the 15-24 years age group was over 20 percent.
The unemployment situation is worst in the depressed southeast, where the population is younger than the national average of 28 years.
Investors stay away because of the lingering insurgency, and Kurdistan Workers Party (PKK) terrorists regularly exert authority by persuading shopkeepers to close down.
"We have a holistic approach for Batman and for the region in general," Şimşek told a Reuters correspondent who accompanied him to the area.
"The government has accelerated investments in recent years. But we also want people to change. Who would invest in a region where shops are forced to shut down?" he said.
A refinery built by the state in 1955 and later sold to Koç conglomerate unit Tupraş remains the backbone of Batman's economy, though the town has benefitted from a recent surge in incentives and investments provided by the government.
A modern airport, new main roads and luxury apartment blocks are signs of the new money that has arrived.
FATHER'S WISHES, MOTHER TONGUE
Campaigning in the city where he went to school, Şimşek is still seeking acceptance in some quarters for having gone abroad to make his fortune as an investment banker, most lately with Merrill Lynch.
"Some people regard Şimşek as an outsider although he was born here, I do not agree," says the jobless Kemal. "He knows the world, he has global experience."
Those were qualities Erdoğan recognised when he asked him to join the government in 2007. But Şimşek is also no stranger to hardship.
His mother died when he was six and he was raised by his father, an illiterate small farmer, in a village where they lived in a one-room house without running water or electricity.
"When I told my father that I would go to London for post-graduate studies, he didn't see why," Şimşek recalled. "He told me I should return to my birthplace and give back what I had taken. It was his will."
Şimşek says the AK Party is ending discrimination against Kurds, who make up around 18 percent of Turkey's population of nearly 79 million people.
"There is no need for violence and terror because everyone is a first-class citizen ... There is no longer discrimination," said Şimşek before reeling off the reforms introduced by Erdoğan's government.
Among those cited is the removal of a ban on teaching the Kurdish language after Erdoğan relaxed decades-old policies of denying Kurdish identity two years ago.
State television now broadcasts in Kurdish as well as Turkish and election candidates are allowed to campaign in Kurdish, as Şimşek demonstrated at the beginning of an address to constituents in the small village of Inatli.
"Greetings to everyone. I am here for you," said Şimşek, smiling broadly as he spoke in their mother tongue.
Kurds are largely disillusioned with the "Kurdish initiative", however.
Political analysts say Erdoğan failed to follow through for fear of a backlash from arch nationalists, members of his own party and ordinary Turks embittered by violence of past years.
In fact, the AK Party runs second in Kurdish areas to the pro-Kurdish Peace and Democracy Party (BDP), which critics accuse of being the political wing of the PKK.
Going into the election, the BDP has made political capital from an ongoing trial of 150 Kurdish politicians and activists, accused of ties to the PKK, as the chief judge refused to hear the accused defend themselves in Kurdish.
In addition the BDP launched a campaign of civil disobedience in March.
In the sleepy town of Sason, Şimşek is seen as something of a meal ticket.
"He has the run of the money," said kebab shop owner Mustafa. "If he is elected from Batman, the province will certainly prosper."