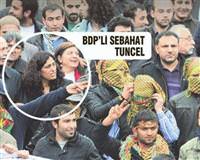 SABAH has accessed a photograph taken by intelligence units of the demonstrations that surfaced following the Supreme Election Board ruling to cancel 12 BDP members’ independent candidacy for the June 12th election.

Taken on April 19th, the photograph depicts Sebahat Tuncel, an independent candidate for the Peace and Democracy Party, or BDP running in Istanbul, standing next to a PKK terrorist holding a Molotov cocktail. With their faces disguised by keffiyehs, one of the PKK activists appears geared up to light and then throw the explosive. While some people standing nearby appear to be trying to intervene, Sebahat Tuncel is simply observing.
Speaking during the demonstration, Tuncel had stated, "Are you pointing the road to the mountains to us in saying we cannot conduct politics in Ankara. There are 20 million Kurds in Turkey. Are you going to arrest all 20 million? Turkey does not want a solution to the Kurdish problem. They want their public to be in conflict."
After Tuncel had made this address, the group then began marching to Aksaray. A Molotov cocktail is seen in the hands of one of four or five PKK members. One of the people joining in the march appears to warn the militant whose face was covered, to not do it. However, Sebahat Tuncel just watches. Soon that Molotov cocktail is going to be set on fire and most likely thrown in the direction of police officers. This moment was documented by an intelligence agent. Police are now looking for the perpetrator and his accomplices in the photograph.