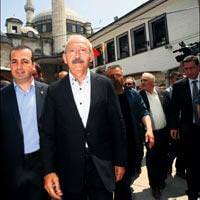 The leader of Turkey's main opposition party accused the governing AK Party of a secret agenda to monopolize power and pledged to reinforce democracy if he becomes prime minister after June 12 elections.

Kemal Kılıçdaroğlu, leader of the Republican People's Party (CHP), said he had created a "youthful and dynamic team" since taking the helm a year ago at what has long been regarded as a staid pillar of Turkey's secularist establishment.
But Kılıçdaroğlu faces a colossal task unseating Prime Minister Tayyip Erdoğan, whose near decade in power has brought Turkey greater prosperity and unprecedented political stability.
The CHP has not tasted power for decades and is unlikely to do so after Turkey votes on June 12. Polls put its support at 25-30 percent, some 20 points behind Erdoğan's AK.
"We believe the AK Party has a secret agenda," Kılıçdaroğlu told Reuters in an interview in his campaign bus as it sped between election rallies in the country's largest city Istanbul.
"The AKP has created its own partisan media, its own investment groups and its own judiciary." "We want to embrace modern civilization, we want to embrace freedom and democracy in line with Western standards," he said, sat below the six-arrowed emblem of the CHP, the party of modern Turkey's founder Mustafa Kemal Ataturk.
Those arrows symbolize the pillars of Kemalist ideology: republicanism, populism, secularism, revolutionism, nationalism and statism.
"GANDHI KEMAL" Critics say the weight of that old secularist ideology, dating backing to the foundation of the Turkish Republic in 1923, has held the party back amid the meteoric transformation which the country has gone through in the past decades.
Kılıçdaroğlu said he headed a new party, stressing human rights and freedoms, alongside traditional attachment to secularism. He has dropped old guard loyalists and introduced a record number of women as candidates in a bid to regain ground.
Nicknamed "Gandhi Kemal" because of his slight, bespectacled appearance rather than for any statesman-like vision, the CHP leader has boosted support for his party since taking over from Deniz Baykal, unseated by a video sex scandal last year.
His popular touch is clear as he weaves through crowds in Istanbul's Ortakoy district on the shores of the Bosphorus, shaking hands with applauding shopkeepers.
Critics accuse Erdoğan of having authoritarian tendencies…
The prime minister has vowed to rewrite the constitution if he wins, and there is speculation he intends a switch to a more presidential form of government, and has eyes on the presidency.
Kılıçdaroğlu also attacked the government's record on foreign policy, focusing on what he said was its failure to advance Turkey's troubled bid for EU membership and tensions with the West over its Middle East policy, particularly on Iran.
"What I have seen in foreign policy is that Turkey has to a great extent lost its power in the international arena," he said.
Kılıçdaroğlu, born in 1948 in the mountainous eastern province of Tunceli province, spent his professional life as a civil servant in the finance ministry and social security before entering parliament in 2002 after his retirement.
He is married and has three children, including a son who is a drummer in a rock band.