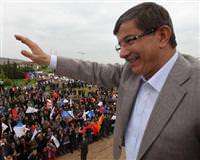 Democratic governments cannot stop their citizens launching another pro-Palestinian flotilla to Gaza, Turkey's foreign minister said on Monday, a year after the storming of an aid ship by Israeli marines.

U.N. Secretary-General Ban Ki-moon called on Friday for activists to be discouraged from again setting sail for Gaza, but Ahmet Davutoğlu said it was not within the authority of a democracy to prevent private challenges to an illegal blockade.
"No democratic country can think that they have full control over these NGOs (non-government organisations)," he said.
The killing of nine Turks aboard last year's flotilla caused a diplomatic storm and damaged Israel's ties with Ankara. Israel has tried to mend relations but insists on keeping the blockade.
Davutoğlu said in an interview that warnings about a second international Gaza flotilla should be directed at Israel, which needed to recognize the changing realities in the Middle East.
"Nobody should expect from Turkey and from other (U.N.) member states to forget that nine civilians were killed last year," Davutoğlu told Reuters at his residence in the southern central city of Konya, where he is campaigning for election in a parliamentary poll due on June 12.
"Therefore we are sending a clear message to all those concerned. The same tragedy should not be repeated again."
Pro-Palestinian charities and activists are organizing a second aid flotilla to try to break the Israeli blockade of Gaza, to mark the anniversary of the first attempt.
Davutoğlu repeated Turkey's demands that Israel should end its blockade of the 1.5 million people living in the Hamas-controlled enclave and apologize and pay compensation for the killing of the nine Turks, one of whom was a U.S. citizen.
Israeli marines shot them dead on the Mavi Marmara, the lead vessel in a six-strong flotilla, on May 31 last year.
Davutoğlu said the international community had failed to bring Israel to account despite a U.N. Human Rights Council report that declared Israel's actions unlawful after an investigation boycotted by Israel.
"What is the result? Do we think that one member state is beyond international law?" Davutoğlu said.
ISRAEL CITES SECURITY
A second probe set up by Ban and including an Israeli delegate is still ongoing.
Israel rebuffed the Turkish censure, saying the blockade was a legitimate precaution against arms shipments reaching Islamist Hamas and other Palestinian guerrillas in the Gaza Strip.
In Jerusalem, Deputy Israeli Foreign Minister Danny Ayalon said in a television interview that future flotillas would be stopped for security reasons and because "they want to create a provocation and challenge Israel's sovereignty in the region."
Turkey's friendship with Israel cooled after Prime Minister Tayyip Erdoğan condemned Israel's 2008-2009 war with Hamas, and relations went into deep freeze after the Mavi Marmara incident.
"Israel must accept the (need for an) apology and compensation if they want to be a partner in this region," Davutoğlu said.
He said Israel should recognize the changing landscape of the Middle East by ending the blockade. Egypt's relaxing of travel for Palestinians across its own border with Gaza further obviated the reason for the blockade, he said.
While Davutoğlu's wrath was saved for Israel, Turkey is increasingly concerned by the civil unrest in friend and neighbor Syria, where Ankara vies for influence with Iran.
More than 1,000 people have been killed in a crackdown by President Bashar al-Assad's security forces since pro-democracy protests broke out in Syria in March.
NATO-member Turkey has called repeatedly for an end to the violence, but uses tempered language in dealing with Syria.
"We will continue to work very hard in order to make possible the political transformation in Syria," Davutoğlu said.
He said his government was not involved with a gathering of Syrian opposition groups in the southern Turkish city of Antalya this week, and he had only learnt of it in the media.
Erdoğan, who has urged Assad to make reforms since the "Arab Spring" began, received another assurance when the two leaders spoke by telephone on Friday, Davutoğlu said.
"It is clear that the political will has been reconfirmed," Davutoğlu said. "But we will see what will be the action. This is more important."