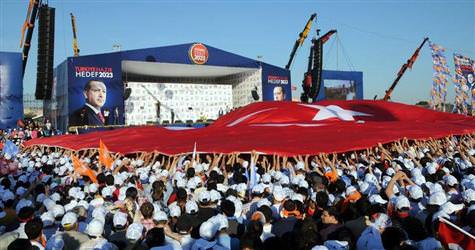 Speaking to a crowd of over one million, Erdoğan stated "On November 3rd, 2002, the public reclaimed their voice by overtaking the government. We have strengthened democracy in this country and now we are one the way to achieving advanced democracy.”

Prime Minister Recep Tayyip Erdoğan also offered up criticism of CHP Chairman Kemal Kılıçdaroğlu's statements that he would be 'pulling out his teeth,' by stating "Are you an accountant or a dentist? I think you have mixed up your profession. However, Kılıçdaroğlu I wouldn't trust my teeth with you, you should continue to be an accounts specialist. However God shouldn't let this country fall into the hands of an accountant like you. First you need to choose your profession right." Erdoğan also referred to Kılıçdaroğlu's claim that one million supporters gathered for his rally, by stating, "If that's what he is saying then that means we have ten million people at today's rally." Erdoğan's Istanbul rally took place at Kazlıçeşme Square, before departing by helicopter Erdoğan touched upon the following topics during his address:
A GLORIOUS CITY: "I feel very fortunate for having had the opportunity to serve this city and the glorious people who dwell in it. I was born in this city. I grew up in this glorious city. (As a 600 square meter flag was unraveled before him). There are some that are uncomfortable with the color of our flag, with its crescent and its stars. In Hakkari, there are some who would let a BDP supporter hold up a flag for CHP and not allow a Turkish flag. June 12th will be the day when they are asked to account for themselves.
THE VOICE OF THE DOWNTRODDEN: I know that all of those in poverty, those oppressed and the downtrodden look to Istanbul. We are well aware of our responsibilities. We realize that the world is waiting for words from us, for an extended hand and for help. We are trying to be the voice of the downtrodden.
A NEW CONSTITUTION: Our biggest project following the June 12th elections will be a new constitution. On November 3rd, 2002 the public said, 'this is enough, the decision belongs to the people.' They took over the government. Pay heed, the public took over. From that day on, we have strengthened this nation's democracy with your support, blessing and your prayers. However it is not enough. Now, we are saying we want advanced democracy. We need to be stronger. We want this June 12th election to be an explosion at the polls in Istanbul. We are determined and we are certain and you will see on June 12th that with God's blessing, the triumph will be ours.
PARTICIPATORY DEMOCRACY: Do you know what we want? We want a civilian participatory and liberal constitution. This is befitting to us. And we are substantially ready for this. All civil society organizations will participate. I am sure of that. However, if we come to power with over 367 deputies, then it means the public has handed us this duty in which case we will apply to the parliament with our preparations. Come, let's work together. They didn't. As you know, they didn't work with us on the 26 item package. MHP did not accept it, and CHP asked us to drink coffee. BDP sends just 2-3 representatives. Who is there? There is just the AK Party. Because we are well aware of the duty granted to us by the public."