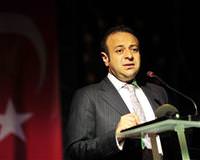 Turkey seeks to follow the path of former military dictatorships Greece, Spain and Portugal into the European Union by shaking off the last vestiges of 1980s military rule after next week's parliamentary election.

Turkey's odyssey, European Affairs Minister Egemen Bağış says, is watched by countries in the Balkans, Central Asia, and notably those in the Middle East and North Africa struggling for change, as a shining example.
"People who are risking their lives in Syria, in Tunisia, in Egypt are demanding democracy, reform and human rights -- in a way desiring to become like Turkey," Bağış told Reuters in an interview at a swanky marina in Ataköy, outside Istanbul.
The Turkish role model has become something of a cliche during the Arab Spring, but at home Bağış's Justice and Development Party, better known as AK, is under fire over its democratic credentials from political opponents.
Its leadership was stung this week when the influential Economist magazine suggested voters vote for the secular opposition Republican People's Party (CHP).
Thanks in good part to a booming economy, and the dominant personality of Prime Minister Tayyip Erdoğan, the AK is sure to win the vote, and the only uncertainty is the margin of victory.
Aiming to pass a new constitution, to replace one drafted under military rule in the 1980s, Erdoğan's task will be easier if the AK scores a parliamentary majority of two-thirds.
Giving a third consecutive term to Erdoğan, the Economist said could result in the prime minister's authoritarian tendencies getting the better of his democratic ones.
"The Economist is wrong," Bağış said baldly, adding that it was the opposition parties that refused to engage constructively with the AK on constitutional amendments that were passed by a 58 percent majority in a referendum last year.
A new constitution was needed to make a clean break with one, essentially authoritarian in spirit, written in the aftermath of the 1980 military coup, said Bağış . Spain and Portugal has gained EU admission after going through a similar change.
"Like Portugal, Spain and Greece, which applied for EU membership while still being administered under a military constitution, and later accelerated the accession process by adopting a civilian constitution," Bağış said, "We will too, after June 2011, adopt a constitution written by civilians and will take a notable step forward in the accession process."
OLD SPECTRES
Critics worry that Erdoğan not only aims to switch Turkey to a more presidential form of government, but also eventually aims to become president.
Shrewd and articulate, 41-year-old Bağış said the voters should resist scaremongering about the AK and remember the coups and the brutal disregard for human rights that characterized the decades before the AK came to power.
"Do they want some deep rooted organizations to govern Turkey, to make sure Turkey goes back to the old dark days of unsolved murders, of killings, of torture, economic disaster...?" he asked. "Or do they want the will of the people to govern?" Because of its Islamist roots, the AK has been attacked by opponents who fear the party could betray the secularist vision of Mustafa Kemal, who founded the Turkish republic in 1923.
Since sweeping to power in 2002, Erdoğan's government has cast itself as being under siege from undemocratic forces made up of reactionary secularists, particularly from within the military and judiciary, who are plotting its downfall.
Police and prosecutors hunting down an alleged militant network called Ergenekon have detained hundreds of suspects without trial, among them journalists and educationists.
Bağış responded bullishly to the accusations of authoritarian behavior leveled at the AK government over the detentions, rampant wiretapping, press freedom and proposed controls on Internet access that the government says is meant to protect minors from pornography.
"They are not being detained because they're journalists," Bağış said, adding that it was the reporters' alleged links to remnants of what is known in Turkey as the "deep state" that landed them in custody.
The nameless members of the "deep state" aimed to protect Turkey, a NATO ally and front-line state in the Cold War era, against communism, but they also saw Islamist parties as a danger.
Since 1960, three elected governments have been overthrown by military coups, and a fourth, a coalition government led by an Islamist party that Erdoğan used to belong to, was forced to quit by the generals in 1997.
Using reforms meant to bring Turkey in line with EU norms, Erdoğan has succeeded in making the military answerable to a civilian government, and old coup makers could face trial.
Yet, the bid for membership of the European Union has been barely mentioned during the election campaign by any party.
Bağış interpreted this as a sign that the main parties were broadly agreed that Turkey would become a stronger country by adopting EU accords, whether or not it ever became a member.
The admission process, begun in 2005, appears close to an impasse, but Bağış wasn't put off by reluctance in some quarters -- notably in Cyprus, France, Germany and Austria -- to let Turkey join. Achieving EU standards was a more important than acceptance, he said.