Turkey comes under e-attack from Anonymous before vote 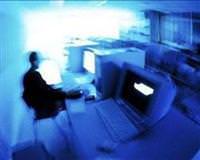 Official Turkish websites were attacked by Internet vigilante group Anonymous on Thursday as part of a protest against what it says is government Internet censorship.

With an election three days away, access to Turkey's telecoms authority website, identified as a main target in the protest against a planned new Internet filtering system, was blocked as planned at 6 p.m.

While authorities worked to limit the disruption, other sites were also blocked including those related to social security, meteorology and several telecoms-related sites.

One of these was the official site where people can report inappropriate Internet content.

"We will not stand back in the face of an attack on our country by this group. We call on the state bodies responsible for fighting such crimes to act," Yavuz Kocoğlu, head of an association set up to tackle IT crimes, said in a statement.

A nationalist Turkish hacker group said it counter-attacked the sites of the grass-roots cyber group, which came to prominence last year with a series of high-profile attacks.

Prime Minister Tayyip Erdoğan's ruling AK Party is expected to secure a clear victory and third term in the vote. In a posting on the anonnews.org website, the Anonymous group issued a statement entitled "Operation Turkey" pledging to fight what it said was Internet censorship there.

Tens of thousands protested in Istanbul in May against Internet censorship and plans for a new filtering system, due to be introduced on Aug. 22, under which users must sign up for one of four filters -- domestic, family, children and standard.

The Information and Communication Technologies Authority says there will be no difference between the standard filter and the current system, but that the other filters would offer the option to restrict access for those who wanted it.

Anonymous said the filtering system would make it possible to keep records of people's Internet activity.

"Though it remains opaque why and how the system will be put in place, it is clear that the government is taking censorship to the next level," the statement said.

"We will bring our support to circumvent censorship and retaliate against organisations imposing censorship."

In response, a group of nationalist Turkish hackers said on the ayyildiz.org website they had launched a retaliatory strike against Anonymous sites.

"The issue is not censorship, it is betrayal of the nation," the statement said.

Turkey has previously banned access to various websites, including YouTube for a period of more than two years, under court orders imposed for infringing decency laws.

In December, Anonymous launched attacks that temporarily shut down the sites of MasterCard Inc and Visa Inc using simple software tools available over the Internet.

It attacked them with denial-of-service attacks that overwhelmed their servers for blocking payments to WikiLeaks.

Last month it denied responsibility for a cyber-attack on Sony Corp's networks that exposed the personal data of more than 100 million video gamers.