Turkey's parties wind up campaigning on eve of vote 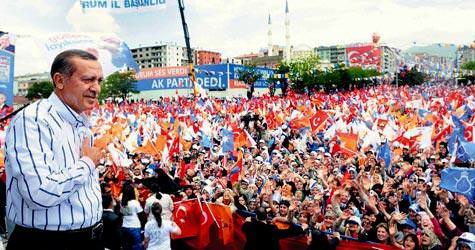 Turkish politicians made their last campaign rounds on Saturday on the eve of an election that is expected to see Prime Minister Tayyip Erdoğan win a third term and could give him a mandate to rewrite the constitution.

Often cited as a Muslim nation with a working democracy, Turkey has become regarded as model for people in North Africa and Middle East living through the "Arab Spring."
Polling stations were due to open at 7.00 a.m. on Sunday in the east, and an hour later in the west.
Turnout was expected to be high as is typical in Turkey and irregularities or violence were not expected to be concerns on polling day.
The sale of alcohol was prohibited from 6.00 p.m. on Saturday, which would otherwise be party night in downtown Istanbul and the westernized cities along the Mediterranean southwest coast.
Opinion polls have shown Erdoğan set to win four more years of single party rule, thanks in large part to his success in ending a cycle of crises to make Turkey one of the world's fastest growing economies.
The only doubt was over the margin of victory. Erdoğan needs more than a simple majority to be certain of pushing plans for a new constitution to replace one written in 1982, two years after a military coup.
Turkey suffered three coups since 1960 and a fourth government was forced to resign by generals unhappy with a coalition led by an Islamist prime minister.
Erdoğan says the new constitution will be based on democratic and pluralistic principles, but his critics say he has an authoritarian streak and fear he will use the opportunity to switch to a more presidential system of government, with an eye to becoming president himself some day.
SIMPLE OR SUPER
The AK, a conservative democratic party that sprang from a banned Islamist party at the end of the 1990s, held 331 of the 550 seats in the last parliament, and polls show it scoring around the same or better.


Getting at least 330 is crucial to Erdoğan's plan to rewrite the constitution, as that will be enough for parliament to call a referendum. If the AK scores a super majority of more than two-thirds a referendum would not be required.

Erdoğan said that regardless of the size of his majority he would consult with other parties, inside and outside parliament, and non-government organizations.
The AK party first swept to power in 2002, though Erdoğan only took the premiership in 2003.
Having fostered stronger ties with fellow Muslim neighbours, Erdoğan became regarded as a statesman throughout much of the Arab world for his trenchant criticism of erstwhile ally Israel for its actions in the Palestinian enclave of Gaza.
Lately, however, he has turned critical of his friend Syrian President Bashar al-Assad for not stopping security forces from attacking pro-democracy protesters, and Turkey has kept its gates open to thousands of Syrians fleeing across the border.