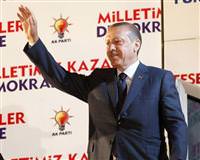 Erdoğan, whose AKP has transformed Muslim Turkey into one of the world's fastest-growing economies and ended a cycle of military coups, won nearly 50 percent of the vote in a parliamentary vote on Sunday.
The results, which are likely to boost financial markets on Monday, mean AKP will be forced to compromise with other parties to press on with plans to replace the existing charter, written almost 30 years ago during a period of military rule.
The vote marked AKP's highest electoral score since it first came to power in 2002, but failed to win Erdoğan enough seats to call a referendum on a planned new constitution.
Preliminary results based on 99.8 percent of the vote show AKP winning 49.9 percent, or 325 seats, just below the 330 required for a plebiscite, and less than the 331 of the 550 seats it had in the last parliament.
Erdoğan, who has a reputation for not liking dissent, in a victory speech before thousands of flag-waving supporters in the capital Ankara, he pledged "humility" and said he would work with rivals.
"People gave us a message to build the new constitution through consensus and negotiation. We will discuss the new constitution with opposition parties. This new constitution will meet peace and justice demands."
MODEL
European Union candidate Turkey and Erdoğan's AK often are cited as models for supporters of democracy living through the "Arab Spring" in parts of the Middle East and North Africa.
But opponents say Erdoğan, whose party evolved from banned Islamist movements, is imposing a conservative social agenda.
Since crushing old establishment parties on a wave of support from a rising middle class of religious Turks, Erdoğan has challenged the secularist military and the judiciary with reforms aimed at winning Turkey membership in the European Union.
He also has set the long-time NATO member and U.S. ally on a more assertive foreign policy course, forging closer ties with Middle East countries, including Iran.
The new leader of the secularist opposition Republican People's Party (CHP), which scored its best result in more than 30 years with 25.9 percent of the vote, warned Erdoğan that he would be watching his movements closely.
"We wish all success to AKP, but they must remember there's a stronger main opposition party now," Kemal Kılıçdaroğlu said.
There has been speculation that Erdoğan would seek to move Turkey toward a more presidential system of government, with an ultimate aim of becoming president himself.
Besides the economy, Erdoğan's government also will need to tackle a separatist conflict in the country's mainly Kurdish southeast. A strong showing by the pro-Kurdish BDP in the Kurdish region played a role in denying the AK's advance.
Analysts said Erdoğan will also need to focus on reviving Turkey's faltering EU bid and on unrest in neighboring Syria, which has sent thousands of refugees spilling over the border as Syrians flee an increasingly bloody crackdown.