'We are a government for 74 million' 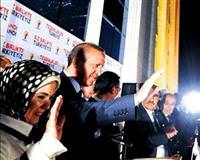 After a sweeping election victory, Prime Minister Erdoğan, accompanied by his wife Emine Erdoğan, addressed the public with a traditional balcony speech in which he promised there would be a consensus in the drafting of the new constitution.

Prime Minister Tayyip Erdoğan waited until all of the votes were counted for an election which granted his Justice and Development Party a third term victory, to deliver his highly anticipated address from the 'balcony' of the AK Party General Headquarters. Greeting thousands of fellow party supporters, Erdoğan, joined by his wife Emine, promised that he would seek a consensus when drafting a new constitution. Erdoğan said, "we will knock on the opposition's door." Erdoğan went to deliver the following messages from the 'balcony':
I WANT TO THANK OUR NATION: As the AK Party, at the same time, we are experiencing a wide range of excitement. We are feeling the excitement of having received the authority of our nation for a third time, in a manner that is rarely achieved in the history of our democracy. I want to especially thank our glorious nation for their trust in us, the AK Party.
TURKEY'S VICTORY: I want to state the following from the bottom of my heart to the entire nation, whether or not your vote was for the AK Party. The victor of the June 12th, 2011 election is absolutely without question Turkey. Today, once again Turkey and once again democracy has won. The nation went to the poll booths, took the stamp in their hands and marked the final word and made the definitive decision. This puts an end to all debate, all question marks and all apprehension. Seventy four million of my Turkish brothers and all of my Kurdish, Zaza, Arab, Laz, Georgian and Roman brothers have won.
MENDERES EMPHASIS: Today, the Caucasus, the Balkans, Europe and the Middle East have also become just as victorious as Turkey. Freedom, peace, justice, stability have become as victorious today as democracy. Turkey has achieved a level of democratic maturity that can act as an example to the region as well as to the entire world. This country's democracy, which sacrificed the lives of Adnan Menderes, Fatin Rüştü Zorlu and Hasan Polatkan, is now reaching an unwavering level of strength. The dreams and longing of the late Turgut Özal have been fulfilled. With the strong democracy befitting the philosophy of the founding of the Turkish Republic by the Veteran Mustafa Kemal and his friends, we have reached the level of achieving modern civilization.
GANGS ARE NOW A PART OF THE PAST: With God's grace and the nation's recognition, the Turkey which followed a path determined by gangs, is now a part of the past. The custody and power over national will, by those acting beyond the law is now undisputedly over. Turkey has now turned a clean page.
THE GOVERNMENT FOR ALL OF TURKEY: Just like with the past AK Party governments, the new AK Party government will not just govern those who voted for them, it will be the government for all of Turkey's 74 million. Once again, the AK Party will be there in Turkey's 780,000 square kilometers. They are in the east and in the west. AK Party is the number one party in all seven regions. This is due to the fact that we did not discriminate nor ostracize anyone. We embraced everyone. We have been working to build a Turkey in which 74 million people will live as brothers and in unity.
EVERYONE'S LIFESTYLE IS A SACRED ENTRUSTMENT: The lifestyles, beliefs and values of every individual that makes up the 74 million have been sacredly entrusted to us. No one should doubt in any way, whether they voted for us or not, that we will consider entrusting their lifestyles, beliefs or values will be our honor, our glory and our integrity.
A PROMISE FOR A CONSENSUS ON THE CONSTITUTION: As we expressed in the squares, all together we will draft a libertarian constitution with civilian participation. Everyone will find themselves in this constitution. The east will find itself. The west will find itself. The north and the south will find itself. In short, the nation will say, 'this is my constitution'. This constitution will appeal to every single individual in the nation.
We will be trying to read the message delved by the polls in the best way possible. Our beloved nation did not just give us the authority to run the government. At the same time, they have also granted us the duty to draft a new constitution. Our nation, has delivered the message that they want this constitution to be drafted through a consensus. We assess the promises made by the opposition parties on this issue as being a promising development. We will not close our doors simply because we have elected fewer than 330 deputies. We will go to the main and other opposition parties. I am stating tonight, that if they accept the terms then we will go beyond the parliament, to other parties and civil society organizations, from the media to academics to anyone who has a say on the matter, in order to seek out the widest possible level of counsel and consensus.
Turkey is victorious. Democracy has won, brotherhood has won. No one should feel sorrow. No one's excitement and joy should sadden another. Because, we make up Turkey all together. I hope that some of the things that were said during the campaign process, all of the misunderstandings and hurtful words are left behind in the squares.