Everyone's a winner in Turkey's election 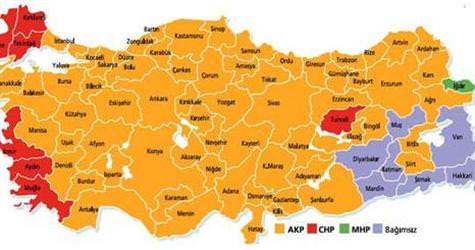 Turkey's ruling AK Party mustered its biggest share of the popular vote on Sunday but the two biggest opposition parties also fared well as did Kurdish politicians running as independents.

Out of the eligible 50 million voters, a whopping 43 million, or 87 percent, voted.
Following are a few details from the results:
HOW THE MAIN PARTIES FARED
Prime Minister Tayyip Erdoğan's AK Party increased its share of the vote to 49.9 percent from 46.5 percent in 2007 and 34.3 percent in 2002, the first party to manage three successive hikes in 60 years of multi-party democracy in Turkey. Despite the larger share of the votes, AK's number of seats fell to 326 from 341 in 2007 due to the distribution of votes across different provinces.
The largest opposition Republican People's Party (CHP), energized by new leader Kemal Kılıçdaroğlu, fell short of its goal of 30 percent but still increased its share to 25.9 percent from 20.8 percent in 2007 and 19.4 percent in 2002 and recorded its best performance in three decades. The number of seats it holds in parliament rose to 135 from 112 in previous elections.
The far-right Nationalist Movement Party (MHP) managed to get past the 10-percent hurdle to get seats in parliament despite a video tape sex scandal that forced the resignation of 10 senior members weeks before the election. It won 13 percent of votes, down only slightly from 14.3 percent in 2007 and well above the 8.4 percent it scored in 2002.
STRONG KURDISH OUTCOME
A record 36 Kurdish candidates won seats in parliament as independents, up from 22 in 2007. Among them were prominent Kurdish politicians Ahmet Turk and Aysel Tugluk, who lost their seats after their Democratic Society Party was banned in 2009 and ran as independents backed by the pro-Kurdish Peace and Democracy Party (BDP).
Leyla Zana and Hatip Dicle, both imprisoned for about 10 years after serving as members of parliament in the early 90s, were also elected. They were released from prison in 2004.
Kurdish independent candidates won over 60 percent of the votes in four predominantly Kurdish southeast provinces.
REGIONAL BIASES SHOW THROUGH
Out of 81 provinces, the AK Party failed to win any seats in only three of them, all of those in southeast Turkey. There were 12 provinces which went 100 percent AK.
The CHP held on to its strongholds in urban areas dotting the southwest Mediterranean coast. Areas that favor the CHP complain that they are penalized for their politics by missing out on new investment and suffering economically while the rest of Turkey enjoys a boom.
The CHP also won all 3 seats from eastern Tunceli, a centre of the Alevi Muslim sect which has shunned the AK, but that was an anomaly in central Anatolia, as the AK dominated the surrounding provinces.
WINNERS AND LOSERS
Former national soccer star Hakan Sukur, who holds the record for the fastest goal in a World Cup match scoring after 11 seconds against South Korea in 2002, won a seat for the first time as an AK Party candidate. Sukur is expected to become the new sports minister.
Foreign minister Ahmet Davutoğlu, running for the first time, won a seat in the southern central city of Konya.
Erol Dora, an independent backed by the Kurdish block, will be the first Syrian Orthodox church follower in parliament.
The nationalist far-right Great Union Party (BBP) leader Yalcin Topcu resigned while the votes were still being counted on Sunday after the party won just 0.73 percent of the votes.
Several people implicated in the government's investigations into an alleged anti-government militant network called "Ergenekon" and the so-called "Sledgehammer" plot to overthrow the government in 2003 ran in the election.
-- Journalist Mustafa Balbay and medical doctor Mehmet Haberal, among the hundreds of people who are in jail on suspicion of belonging to the Ergenekon network, won CHP seats. Former chief prosecutor Ilhan Cihaner, who was detained but released, also won a CHP seat.
-- Former Ankara chamber of commerce chairman Sinan Aygun, detained and later released under the Ergenekon probe, also won.
-- Retired general Engin Alan, charged in the Sledgehammer case, won a seat under the MHP.
-- Journalist Tuncay Ozkan, a defendant in the Ergenekon case, and retired general Cetin Dogan, a defendant in the Sledgehammer case and currently detained in Silivri prison, failed to win after standing as independents.