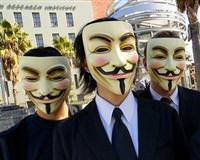 Turkish police detained 32 members of the Anonymous cyberactivism collective on suspicion of planning attacks on a number of official websites.

The action came in response to a complaint from Turkey's Directorate of Telecommunications, whose website was taken down on Thursday as part of a protest against what Anonymous says is government censorship of the Internet.

Turkey, whose ruling AK Party won a parliamentary vote on Sunday, plans to introduce a new Internet filtering system in August, under which users will have to sign up for one of four filters -- domestic, family, children and standard.

Anonymous, a loose activist collective which has attacked many websites including those of Amazon and Mastercard in the name of Internet freedom, says the system will make it possible to keep records of people's online activity.

Eight of the 32 suspected cyberactivists detained on Sunday were minors.

The police operation in Turkey follows the arrest of three so-called Anons in Spain on Friday on suspicion on organizing cyber attacks against the websites of Sony, banks and governments.

Anonymous said on its website (www.anonops.blogspot.com) and on a video posted on YouTube that the arrest had not shut down the leadership of its operations as claimed, because the group had no centralized leadership.

The group said it had taken down the Spanish national police website for some hours on Saturday in retaliation.

It said the arrests were part of a police attempt to distract attention from protesters dispersing in cities across Spain at the weekend after four weeks demonstrating against government austerity, reforms and unemployment.

The video featured a figure wearing the Guy Fawkes mask made popular by the graphic novel "V for Vendetta" which the group is known for wearing and expressed sympathy with the protesters, known as "indignados" (or indignant).

Anonymous members cripple websites by overwhelming their servers with traffic in so-called denial of service attacks. The group publicizes these campaigns on the Web, giving supporters the information to attack a targeted site.