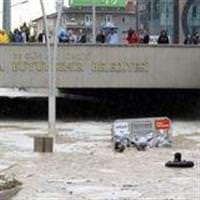 Downpours in Ankara have resulted in roads and even overpasses filling with water. One heavily flooded underpass led to chaos in the capital.

In just two hours of heavy downpours, an underpass on Ankara's Çetin Emeç Boulevard flooded, with water levels reaching six to seven meters high, trapping two vehicles and their passengers.
A gas truck arrived to the scene to help those trapped and ended up stranded itself! The driver put his life at risk by driving the gas truck into the underpass in order to save those stranded, however the truck ended up being swept by the floods and was also left stranded.
ANKARA RESIDENTS WARNED AGAINST DRIVING!
Explaining the great difficulties he faced, the truck driver states, "There were four people that were stuck. I went into the underpass in order to try to save the remaining people. At one point the water intensified and I barely made it out alive. I saved myself by swimming."
One of the victims explained what they experienced;
"When we were entering the underpass the water level dropped. The vehicle in front of us panicked and all of a sudden we were stranded in the underpass. We got on top of the cars, but even still the water was above our heads. Two of us swam for dear life and were saved. There were two others that were saved by the help of the truck. There is no one left stranded there at the moment, however our cars are under the water."
Ankara's underwater rescue team arrived to the scene. Divers searched for any other's left stranded. A number of firefighters worked on evacuating the water and traffic came to a standstill in the capital.