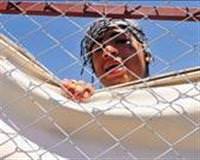 Turkey called for Syria to immediately halt a violent crackdown on protesters and pass democratic reforms, in a meeting on Thursday between Foreign Minister Ahmet Davutoğlu and a top Syrian envoy.

The crackdown, which Prime Minister Tayyip Erdoğan has condemned as "savagery," has tested relations between the two countries, and Turkey has given sanctuary to some 8,900 Syrian refugees who have streamed across the border.
"We want a strong, stable, prosperous Syria. To achieve this we believe it necessary to implement the comprehensive reform process towards democratisation guaranteed by (President) Bashar al-Assad," Davutoğlu told reporters after three hours of talks with Syria's Hassan Turkmani on Thursday morning.
"In order to achieve this the violence must stop immediately. Yesterday I clearly saw the fear in the eyes of the people and I shared this," he added, describing talks with Turkmani as friendly and Syria as Turkey's "closest friend."
Davutoğlu on Wednesday talked to refugees at the border, including wounded men in camp hospitals at Yayladağı, across from the Syrian town of Jisr al-Shughour, 20 km (12 miles) away. Refugees chanted "People want freedom!" and "Erdoğan help us!"
On Thursday, Syrian tanks and armoured vehicles reinforced positions around the northern town of Maarat al-Numaan.
Turkmani on Wednesday met Prime Minister Tayyip Erdoğan, who has also called for rapid reform in Syria. Turkmani said then Syrian refugees staying in makeshift camps in Turkey's border province of Hatay would soon be returning to Syria.
Assad had asked to send an emissary when he called Erdoğan on Tuesday to congratulate him on winning a third term in office.
On Thursday afternoon Davutoğlu was to meet with Ankara's ambassadors to the Middle East, United States and some EU countries to discuss Syria and policy across the region.
"LAST CHANCE"
Former advisor to Erdoğan, Nabi Avci, said Turkey was dismayed by Syria's response to its requests that it refrain from using violence against civilians and undertake reforms.
"Turkey's efforts to bring about peaceful change in Syria will continue," Avci said in Istanbul.
"The response of the Syrian regime so far has been, unfortunately, unhelpful and disappointing," said Avci, elected a member of parliament for the ruling AK party in Sunday's vote.
Asked about the possibility the Turkish military could enforce a buffer zone on Syrian territory to protect civilians, Avci said Turkey had no plan for military intervention in Syria.
But he said Turkey constantly reminded the Syrian government that intervention could become part of the international community's agenda, and urged Damascus to make rational choices.
"We are trying our best for the last chance for the Syrian regime," he said.
Preparations are being made for another influx of refugees far to the east along the 800-km (500-mile) border, with more tent camps able to shelter 10,000 people being set up near the Turkish city of Mardin and the town of Nusaybin.
High-ranking Syrian soldiers and police are among those seeking refuge at the camps in Turkey, state-run Anatolian news agency reported. Most recently a lieutenant colonel and four other soldiers arrived in Hatay on Wednesday evening after deserting.
There were also increasing numbers of Syrians arriving at the border but remaining on the Syrian side in makeshift tents.
Anatolian said all hotel rooms had been booked up in Hatay ahead of the visit by United Nations refugee agency goodwill envoy Angelina Jolie. The actress was expected to arrive on Friday afternoon.