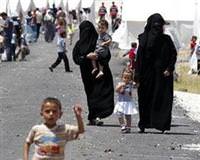 At the small playground in the Boynuyogun refugee camp scores of children wait patiently for a turn on the swing, while in the television tents the adults watch events in the Syria they have fled.

The camp's 600 tents house 3,500 people, around a third of the 10,000 refugees from northern Syria who have streamed into Turkey fearing a bloody crackdown by President Bashar al-Assad.

Everywhere are children, including tiny infants cradled in their parents arms. A scorching sun beats down onto the treeless site and refugees seek shelter beneath the canvas or sit in the shade of blankets slung between the tents.

Journalists and photographers were admitted to one of the five Syrian refugee camps in Turkey for the first time on Saturday -- the first official access to any camp or refugees since the exodus of Syrians began two weeks ago.

Most are from Jisr al-Shughour, the town where Syrian authorities said 120 security personnel were killed in fighting they blamed on "armed groups." Many refugees have said those killed were deserting troops, resulting in brutal reprisals.

"Peaceful demonstrations started in Jisr al-Shughour three months ago. Then the detentions and torture started," said an elderly refugee who gave his name as Adem, and who spoke in an urgent, animated manner.

"We were singing national anthems, using cartoons criticizing Asaad. Then the security forces started detaining people ... I am one of them."

Adem said forces hit his back and head with the butts of their weapons, blindfolded and bound him, then beat him and others with electric cables.

"They passed electricity through our toes. I was tortured, too. They asked for the names of people who had participated in the demonstrations."

"We were so afraid that we ran away to Hassaniye village. For 10 days we stayed there before coming here ... some old people couldn't leave the town, they stayed in a desperate condition."

"After we left we heard the army took people from villages to the evacuated houses and shops then brought in cameras and told the whole world that there is no problem here."

The International Federation for Human Rights and the U.S.-based Damascus Center for Human Rights Studies said in a statement that, according to local sources, Syrian forces had killed more than 130 people and arrested over 2,000 in Jisr al-Shughour and surrounding villages over the past few days.

Syrian authorities blame the violence on armed groups and Islamists, backed by foreign powers. Syria has barred most international journalists, making it difficult to verify accounts from activists, refugees and officials.

At Boynuyogun on Saturday men smoked in groups and women washed the few clothes they had brought. Children began to chant anti-Assad statements and made victory signs. Arabic news channels rang out from the television tents.

"Right now people are content with their situation because things are so critical in their home country they don't won't to go back. Some have suffered very bad traumas so we are offering psychological support," said an official from Turkey's Red Crescent.

Three babies have been born in Boynuyogun since it opened on June 10, he added.

"We want to build other playgrounds for the children but we don't have any space left. We weren't expecting so many people."