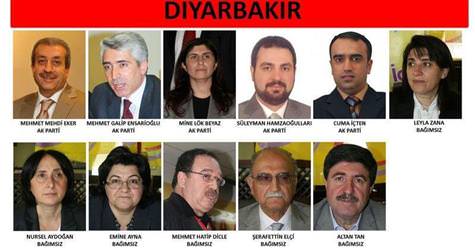 Turkey is facing a parliamentary boycott by Kurdish lawmakers that could force fresh by-elections, after its election board stripped a Kurdish deputy of his newly won seat in parliament over a conviction for links to militants.

Hatip Dicle, one of 36 Kurdish-backed candidates to win a seat in a parliamentary election in June, lost an appeal earlier this month against a 2010 conviction for spreading terrorist propaganda, which resulted in an 20-month sentence.
Any terrorism-related conviction carrying a sentence of more than a year makes the recipient ineligible for parliament.
Dicle, who is backed by the pro-Kurdish Peace and Democracy Party (BDP), is one of six new lawmakers currently in prison while on trial for links to the PKK terrorist organization. The others do not face losing their seats.
"We will either enter the parliament with 36 deputies or not enter at all. The Election Board decision is unacceptable for both the people of Diyarbakir and others in the region," said Filiz Kocali, co-chair of the BDP.
"It is now the election board and Prime Minister Tayyip Erdogan's job to find a solution. This ruling ignores the people's will, and is provocative as well as unjust and unlawful," she added.
If more than 28 lawmakers, or five percent of the 550-seat parliament, resign together it would trigger by-elections for their seats.
Dicle, who won his seat in Diyarbakir, the largest city of the predominantly Kurdish southeast, said he would appeal the election board's decision.
BDP candidates stood as independents in the election to bypass a threshold of 10 percent support which parties must secure to enter parliament.
They boosted their support from 22 seats in the previous election, a signal that Turkey's Kurds want more autonomy and reforms to help end a 27-year insurgency led by the PKK which has killed 40,000 people.
With Dicle banned from entering parliament, the election board will discount his votes and allocate his place to the candidate who most narrowly missed out on one of the 11 seats for Diyarbakir.


This is expected to be a member of Erdogan's AK Party, handing over the victory in the province from independents to ruling AK, with 6 over 5 MPs.

Hatip Dicle is expected to be replaced by the AK Party's Diyarbakır candidate that came in sixth place, Oya Eronat.

Oya Eronat lost her 17-year old son Eren Şahin in 2008 to a PKK bomb, which exploded in front of a tutoring center.

Eronat, a construction engineer, states "I suffered great pain after my son's death. I will speak against terrorism and share with everyone the grief mother's suffer."