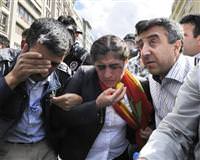 Kurdish candidates who won 36 seats in Turkey's parliamentary election earlier this month were expected to boycott an oath-taking ceremony on Tuesday in a move that could force by-elections and stoke separatist violence.

The candidates who ran as independents from the pro-Kurdish Peace and Democracy Party (BDP) said last week they would shun the swearing-in after the Election Commission ruled that a colleague, Hatip Dicle, must forfeit his seat because of a past conviction for spreading "terrorist propaganda."

And the BDP bloc stands to lose another five seats after courts in the city of Diyarbakir ruled against releasing five candidates, detained on charges of having ties to the militant Kurdistan Workers Party (PKK), preventing them from taking their place in parliament.

Dicle's seat in Diyarbakir, the city at the centre of an insurgency that has raged in Turkey's southeast since the early 1980s, was awarded to the runner-up, a candidate from Prime Minister Tayyip Erdogan's AK Party, leading to more outcry.

But the disqualification of a handful of opponents is potentially enough to take the AK past the key 330-seat mark, that would give Erdogan a large enough majority to call a referendum for a planned new constitution.

President Abdullah Gul had appealed to the BDP Kurds to attend the swearing-in. But the BDP can afford to take a tough stand after a strong showing in the election.

AK officials say the Election Commission and courts act independently, but opposition parties take a different view, promising a turbulent start to Erdogan's third term in power.
There are no constitutional or parliamentary rules governing what should happen if winning candidates refuse to be sworn in.

There is a rule that if more than 5 percent of MPs resign their seats will be thrown open for by-elections, but as the BDP Kurds can't resign unless they have been sworn-in, it leaves the
issue in a grey area.

A parliamentary official, speaking on condition of anonymity, said it could fall to parliament's speaker to decide what to do.

After the oath-taking, MPs will submit applications for the speaker's post. Until a new speaker is chosen, the role will be temporarily filled by the oldest parliamentarian, Oktay Eksi of the opposition Republican People's Party (CHP).

Any decision to call by-elections would carry the risk of provoking more unrest in the southeast at a time when many people are hoping Erdogan will revive efforts to heal wounds and grant more rights to Kurds, to end an insurgency that has killed more than 40,000 people.

The PKK ended a 6-month ceasefire in February, moving to what it calls an "active defence" stance, whereby its fighters defend themselves if under attack.

With tensions rising, Kurdish rebels killed one soldier on Monday in an ambush near Turkey's border with Iran, and last week PKK fighters killed two police officers in the eastern province of Tunceli.

Analysts and investors who had hoped to see more consensus-seeking in Turkey have lost some of that optimism. Aside from the six BDP candidates, courts have blocked three opposition candidates from other parties from being released from custody to join parliament even though they have not been
convicted.

The three candidates -- two from the main opposition CHP and one from far-right Nationalist Movement Party (MHP) -- have been detained on charges related to conspiracies to bring down
Erdogan's government.