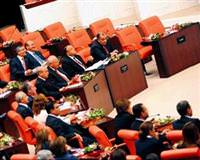 Yesterday, Prime Minister Erdogan headed to the Presidential Palace to undertake the duty of forming the new government.

The day prior, the 24th Term Assembly, which will become the first in the history of the Republic to pen the 'first civilian constitution', was officially initiated with an oath ceremony.
HOPES OF COMPROMISE
Prime Minister Erdogan called on the main opposition party CHP or the People's Republic Party to "put forth their proposals." Yesterday, Minister Cemil Çiçek was scheduled to meet with CHP leader Kılıçdaroğlu.
MEETINGS WITH CHP AND MHP YESTERDAY
In regards to the MP's who were elected while still in custody, Prime Minister Erdoğan states: "They should first put forth their proposals and then we will speak." Supposedly Erdoğan did not grant a request to meet by BDP's Elçi. Meanwhile Çiçek and Ipek requested meetings with HP and MHP on behalf of the AK Party. Yesterday they were scheduled to meet with Kılıçdaroğlu and Bahçeli.