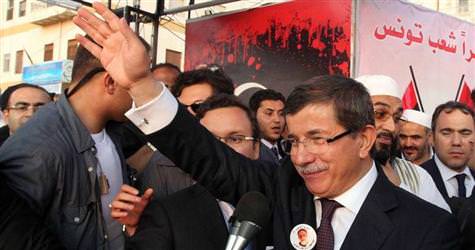 Turkey pledged $200 million in aid for Libya's rebel Transitional National Council and said it was time for leader Muammar Gaddafi to leave Libya.

Turkey, a rising power in the Middle East, had close economic ties with Gaddafi's Libya but has distanced itself from the Libyan leader since a rebellion broke out against his rule.
In a visit to the eastern rebel stronghold of Benghazi, Turkey's top diplomat offered new economic aid to the rebels and in Ankara's clearest political support to the council called it "a legitimate representative of the Libyan people."
"Public demand for reforms should be answered, Gaddafi should go and Libya shouldn't be divided," Turkish Foreign Minister Ahmet Davutoğlu said.
The aid is in addition to a $100 million fund for Libyan rebels Turkey announced in June.
"Turkey will provide another $200 million aid for Libya," Davutoğlu said.
Turkey, a member of NATO, has called on Gaddafi to step down and call a cease-fire in the past and says the two sides must reach a political solution to end a 5-month-old rebellion.
"I am here to express solidarity with the Libyan people. Their legitimate right should be realized, there should be a permanent solution to the crisis which is possible only through a political solution based on the demands of the Libyan people," Davutoğlu told a news conference.
"We see the TNC (rebel council) as a legitimate representative of the Libyan people to achieve their goals."
Last month, Turkish Prime Minister Tayyip Erdoğan said his country had offered a "guarantee" to Gaddafi if he left Libya, but said Ankara had received no answer.
Turkish leaders are among the few in the world who have communication with both the Gaddafi camp and the rebel camp, which could allow Ankara to play a role in any negotiation.
Turkey has also circulated among the sides a "roadmap" which calls for a cease-fire and a political transition phase.
"We will do everything for the implementation of such a plan as needed," Davutoğlu said.