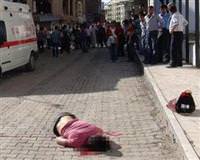 Two Turkish soldiers were shot dead today as they left their homes in the town of Yüksekova in southeast Turkey.

The attacks happened in the province of Hakkari, bordering Iran and Iraq, which is at the heart of a conflict between the state and the PKK terrorist organization.

It was not clear if one or more gunmen staged the attack on the sergeants, who were dressed in civilian clothes.

More than 40,000 people have been killed in the insurgency since the PKK took up arms in 1984.

Separately, an explosion occurred on a main street in the capital Ankara today as a military vehicle passed by. There were no casualties and police were investigating the scene.

No further details were available.