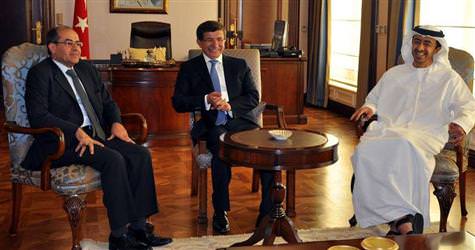 "We hope for significant progress toward a political solution before the month of Ramadan," Turkish Foreign Minister Ahmet Davutoğlu told a news conference after meeting with the Libyan rebel leader. The Muslim fasting month of Ramadan is expected to start in early August.
Davutoğlu's comments came amid a flurry of reports about talks on Muammar Gaddafi ending his 41 years in power in exchange for security guarantees. Earlier on Tuesday, a Libyan government spokesman denied Gaddafi was seeking safe refuge inside or outside the country. Istanbul is set to host a contact group meeting on July 15, bringing together foreign ministers from Western powers and Arab governments, along with leaders of the Libyan opposition National Transitional Council as part of an international effort to bring stability to a post-Gaddafi Libya.
In preparation for that meeting, Davutoğlu met with Mahmoud Jebril, leader of the Libyan rebel administration, Abdelilah Al-Khatib, the U.N. secretary-general's special envoy to Libya, and United Arab Emirates Foreign Minister Sheikh Abdullah bin Zayed al-Nahayan.
"We hope that we will reach a consensus on road map for a political solution before the Libya contact group meeting," Davutoğlu told a news conference with the UAE minister.
"There are some important steps that need to be taken for Libya. And the most pressing one is to put an end to the bloodshed and to launch a political transition process," Davutoğlu said.
'SACRIFICING LIBYAN PEOPLE'
Last month, Turkish Prime Minister Tayyip Erdoğan said his country had offered a "guarantee" to Gaddafi if he left Libya, but said Ankara had received no answer.
"If he is a true leader of the Libyan people, then he must show to the world he can self-sacrifice for the sake of Libya. But unfortunately we are witnessing that he is sacrificing the Libyan people instead," Sheikh Abdullah said.
Davutoğlu also spoke of the need to support the rebel administration financially, in order to provide for the beleaguered Libyan people before Ramadan.
Turkey, a member of NATO, is supporting the Western alliance's operations in Libya in a non-combat role, with efforts focused on keeping open channels for relief supplies to civilians.
Davutoğlu met with leaders of the rebel council in Benghazi on Sunday, and pledged $200 million for humanitarian relief and projects, in addition to $100 million already given.
On Monday, Turkey's bank regulator issued a statement saying state Savings and Deposit Insurance Fund had seized Libyan Foreign Bank's shares in Turkey's Arab-Turk bank.
Libyan Foreign Bank, a subsidiary of the Libyan Central Bank, holds 62.37 percent in Arab Turk Bank, which had 1.14 billion lira ($703 million) in assets in 2010.
The move is part of U.N. sanctions against Gaddafi's government.