Dink’s murderer will be out in 11 years 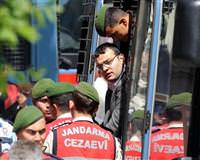 Due to being a juvenile at the time of the murder, the assassin responsible for Hrant Dink’s murder was recently sentenced to 22 years and ten months from what was a life sentence. If he serves just 11 years of that time, he’ll be free to go.

An Istanbul court sentenced on Monday the assassin of Armenian journalist Hrant Dink to nearly 23 years in prison.
Editor of bilingual Turkish-Armenian weekly Agos and Turkey's best known Armenian voice abroad, Dink was shot in broad daylight as he left his Istanbul office in January 2007.
His killer Ogün Samast was 17 and unemployed when the killing took place. He was sentenced by a juvenile court to 22 years and 10 months.
Dink had angered nationalists with articles referring to a Turkish "genocide" of Christian Armenians in 1915.
Another court is hearing the cases against two other main suspects in the conspiracy and a handful of others accused of being linked to the plot.
Reacting to Samast's sentencing, Eyten Mahcupyan, a Turkish Armenian columnist who took over editorship of Agos after Dink's death, praised the court for opting for a severe jail term.
"The court was courageous enough to go with the evidence, and not go down an ideological path in terms of nationalism," Mahcupyan, told Reuters.
He said it would set an example to another court hearing the Dink conspiracy cases, a point echoed by a lawyer for Dink's family.
"Ogün Samast and other suspects were not expecting this sentence. This could ruin their hope of being freed soon," lawyer Fethiye Cetin told Reuters. "This is very important to deter this sort of crime." Dink was frequently criticized by Turkish nationalists, including top politicians and prosecutors, for saying the mass killing of Armenians by Ottoman Turks during World War One was genocide.
Nationalists see such comments as a threat to national unity in predominantly Muslim Turkey
The government says both Christian Armenians and Muslim Turks died in large numbers as the Ottoman Empire collapsed.
CASE MONITORED BY EU Two years before he was killed, Dink received a suspended six-month jail term for "insulting Turkey's identity" in an article.
Last year, the European Court of Human Rights ordered Turkish authorities to pay 100,000 euros to Dink's family in compensation, saying authorities had failed to adequately protect Dink even though they knew ultra-nationalists were plotting to kill him.
The Dink case was closely followed by the European Union as it underlined concerns over EU-candidate Turkey's human rights record and democratic credentials.
Investigations subsequently suggested that Dink's killing and other incidents targeting minorities were part of a bigger plot to undermine Prime Minister Tayyip Erdoğan's government.