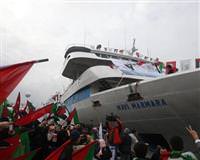 Israeli Defence Minister Ehud Barak floated a watered-down apology to Turkey on Friday for the killing of nine of its citizens aboard a pro-Palestinian activist ship that tried to run the Gaza Strip blockade.

Barak's public proposal appeared aimed at testing the depth of Israel's 13-month impasse with Ankara, and winning over more hawkish members of Prime Minister Benjamin Netanyahu's coalition who say the onus should be on Turkey to make amends.

"We are willing to consider an apology over problems that arose during the operation on the Marmara, if there were any," Barak said from Washington where he discussed the importance of having the two U.S. allies mend ties.

"I don't like it, but it's the choice that needs to be," he said in a statement.

Turkey, formerly a rare Muslim friend of the Jewish state, has insisted Israel apologise for storming the Mavi Marmara cruise ship on the Mediterranean high seas, compensate those bereaved or injured by its marines, and end the blockade on the Palestinian territory.

Israel says the naval closure stems arms smuggling to Gaza'sIslamist Hamas rulers and that this strategy will be supported by a U.N. inquiry's findings, which are expected out next month.

But Barak said the report commissioned by U.N. Secretary-General Ban Ki-moon and authored by former New Zealand Prime Minister Geoffrey Palmer would also include "elements that are very problematic for Israel".

The marines opened fire during fierce brawls aboard the Mavi Marmara. Israel's military later said it was caught off guard by the level of violence the commandos encountered from passengers.

Others Israeli officials have said the Palmer report would find fault with some of the navy's actions and could fuel prosecution attempts abroad.

A reconciliation deal with Turkey, Barak said, "would prevent lawsuits against officers and troops all over the world and cause less censure of Israel".

The Palestinians and their supporters call the blockade illegal and a damper on Gaza's struggling economy.

Netanyahu, who has yet to make a final decision on whether to meet Turkey's terms, has so far offered only expressions of "regret" and proposed setting up a fund for those bereaved or injured.

His advisers had previously said a formal apology and damages payments would be tantamount to Israel admitting culpability for actions it deems self-defence.

Admiral Mike Mullen, chairman of the U.S. Joint Chiefs of Staff, in a July 25 press conference said it was critical to the region for Israel and Turkey to have good relations.

Barak's proposal seem to have a precedent in Israel's hedged apology for its jets'; unauthorised transiting of Turkish territory en route to a secretive bombing run in Syria in 2007.

"If indeed Israeli planes entered Turkish airspace, then there was no intention of undermining or questioning Turkish sovereignty, which we respect," then Prime Minister Ehud Olmert said in broadcast remarks to the Israeli cabinet.