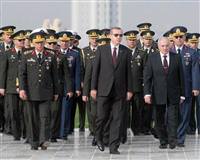 Turkey faced turmoil within its military on Saturday after the country's four most senior commanders quit in protest over the detention of 250 officers on charges of conspiring against Prime Minister Tayyip Erdogan's government.

In a farewell message to "brothers in arms," Kosaner said it was impossible for him to continue in his role as he was unable to defend the rights of men who had been detained as a consequence of a flawed judicial process.

Relations between the secularist military and Erdogan's socially conservative Justice and Development Party (AK) have been fraught since it first won power in 2002, due to mistrust of the AK's Islamist roots.

In years gone by, Turkey's generals were more likely to mount a coup than quit, but Erdogan has ended the military's past dominance through a series of reforms aimed at advancing Turkey's chances of joining the European Union.

The subordination of the generals was starkly demonstrated last year when police began detaining scores of officers over "Operation Sledgehammer," an alleged plot against Erdogan's government discussed at a military seminar in 2003.

The officers say Sledgehammer was merely a war game exercise and the evidence against them has been fabricated.

Some 250 military personnel are currently in jail, including 173 serving and 77 retired personnel. Most of them are held on charges related to Sledgehammer.

According to media reports, a prosecutor investigating another alleged military plot on Friday sought the arrest of 22 people including the commander of the Aegean army.

The detentions have sapped morale and spread mistrust and suspicion among the officer corps, and many had been looking for Kosaner to take a stand since his appointment last August.

More than 40 serving generals, almost a tenth of Turkey's commanders, are under arrest, accused of various plots to bring down the AK party.

"It is clear as day that this extraordinary development has opened the door to a serious state crisis," said Devlet Bahceli, head of the opposition Nationalist Movement Party.

Analysts see little political threat to Erdogan's supremacy. His AK won a third consecutive term, taking 50 percent of the vote in a parliamentary election in June.

The departures of Kosaner and the others could give Erdogan a chance to fill the top brass with officers more friendly to his party, raising the possibility of more officers retiring early, or quitting.

Though the sudden manner of their going is embarrassing, it could gift Erdogan a decisive victory over a military that sees itself as guardian of the secularist state envisioned by the soldier statesman and founder of modern Turkey, Mustafa Kemal Ataturk.

Erdogan marked out Kosaner's successor on Friday, as his office put out a statement naming paramilitary Gendarmerie commander General Necdet Ozel as new head of land forces, and acting deputy chief of general staff, effectively making him next in line when Kosaner hands over the baton.

The statement said the four commanders had retired and made no mention of the reasons why. It said a meeting of the Supreme Military Council, which meets twice-yearly to make key appointments, would go ahead as planned on Monday, showing Erdogan in a hurry to restore the chain of command and present an image of business as usual.
Though well used to Turkey's turbulent politics, investors can easily take fright given the fragile state of world markets.

Just last week the central bank was forced to take steps to halt a sharp fall in the lira currency due to concern over the vulnerability of the Turkish economy to external shocks.