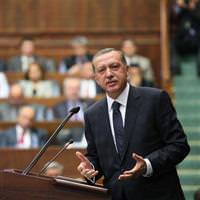 Prime Minister Tayyip Erdoğan vowed on Saturday to press ahead with plans for a new constitution which he said would boost democracy, but he made no mention of the country's top military commanders quitting in what was a pre-recorded speech.

The armed forces commander General Işık Koşaner stepped down on Friday evening along with the army, navy and air force chiefs in protest at the jailing of 250 officers on charges of conspiring against Erdoğan's government.
Erdoğan's office has issued a statement expressing appreciation for the commanders' service but he has not spoken directly on the matter and Saturday's televised speech focused on his new government's plans for the economy and constitution.
"I believe our biggest duty is to prepare a new constitution, democratic and liberal, without shortcomings and meeting the needs of today," Erdoğan said in an 'address to the nation' which did not divert from the pre-written script.
It was not clear when the recording was made.
Erdoğan's ruling AK Party, in power since 2002, won a third successive parliamentary election on June 12 with 50 percent of the vote, giving it a strong mandate to press ahead with its constitutional plans.
"Turkey cannot continue on its path with a constitution prepared in the extraordinary conditions of a period when democracy was shelved," he said, alluding to the time after a 1980 coup when the current charter was prepared.