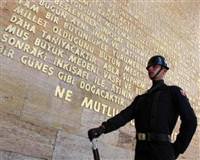 Turkey's military and political leaders face a battle to restore order in NATO's second-biggest army Monday at a military council overshadowed by the resignation of its top four generals in protest at the jailing of hundreds of officers.

Prime Minister Tayyip Erdoğan, who will chair the four-day Supreme Military Council (YAŞ), has moved quickly to designate a successor to Koşaner and will be keen to smooth over a row which financial markets will be monitoring closely Monday.
President Abdullah Gül has denied any crisis and Erdoğan's regular address to the nation Saturday focused on plans for a new constitution in the EU-candidate country, touted as a democratic model for a region in turmoil.
.
The YAŞ, which meets twice yearly to decide key promotions, faces a challenge to fill top military posts as the government opposes some leading candidates while others are on trial accused of seeking to overthrow the government.
Former gendarmerie Chief General Necdet Özel was named ground forces head and overall acting chief after Kosaner quit, but will only take over the armed forces after the YAŞ.
According to sources, the other three top posts will also remain vacant until YAŞ ends. With another top general in jail, five seats among the 14 top generals are set to be empty at the meeting.
Who will be appointed to head the land forces command has now become the most highly anticipated issue.
Potential candidate General Saldiray Berk is likely to be ruled out as a defendant in a trial related to the alleged coup-plot "Ergenekon" conspiracy.
However if the decision made is not based on seniority, there could be further retirement requests.