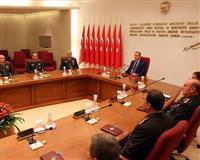 Turkey was set to fill vacancies at the top of its armed forces on Thursday after its four leading generals quit in protest last week at the jailing of hundreds of their comrades charged with plotting to overthrow the government.

Prime Minister Tayyip Erdoğan visited military headquarters during the morning to sign off on the promotion decisions, which were expected to be presented to President Abdullah Gül at 11 am after the conclusion of a four-day meeting of the Supreme Military Council (YAŞ), media reports said.
Erdoğan has already earmarked General Necdet Özel, who until last week was head of the paramilitary Gendarmerie, to fill the top spot as Chief of the General Staff for the second largest armed forces in NATO.