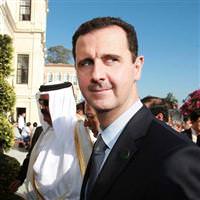 Headed for Damascus tomorrow under Prime Minister Erdoğan’s directive, Foreign Affairs Minister Ahmet Davutoğlu will be delivering the message: “It’s time to see the reality, don’t let your demise be like Mubarak’s.”

Foreign Minister Ahmet Davutoğlu will be arriving in Damascus under Prime Minister Tayyip Erdoğan's orders to deliver a verbal message to Syrian State Leader Bashar al-Assad. Davutoğlu is anticipated to tell Assad in a diplomatic manner that he needs to face reality to ensure he doesn't end up in a similar situation as Mubarak. Davutoğlu will also openly express to Bashar Assad that his administration's legitimacy is now being questioned and will warn that the fact that these massacres are also transpiring during the month of Ramadan has escalated reactions to Syria.

Foreign Affairs Minister Davutoğlu had planned to visit Syria last month, after reforms had been implemented, however due to the escalating violence prior to reforms, Davutoğlu's trip was postponed.

After meeting with Lebanon's Progressive Socialist Party Chairman Walid Canbolat, Prime Minister Erdoğan met with Davutoğlu during the Friday mass to evaluate the events in Syria.

FRIENDS SPEAK THE TRUTH
Expressing his apprehension due to Assad applying further violence during the month of Ramadan, Erdoğan stated, "Friends speak the truth, it is now time to issue a final warning," and has instructed Davutoğlu to go to Damascus.

In reference to the timing of this visit, Erdoğan states, "we need to act before Assad's legitimacy becomes even further debatable." Erdoğan also wants to relay that the end is nearing for issuing warnings, which have continued since January 2011. An immediate meeting date was requested from Damascus and Assad made an appointment to meet with Davutoğlu on Tuesday.

We are here because we consider ourselves friends of the Syrian public and we are speaking of what we know is right.
Stop applying violence to ensure the Assad faimly does not suffer the same fate as that of Husnu Mubarak's.
There is a wide response towards all that has transpired in Syria.
Other organizations may also follow the sanctions implemented by the Eu.
The administration's legitimacy is becoming increasingly questionable every day.
Syria is not a foreign issue for us, it has become a domestic one. We can not remain silent to the Syrian public.
Ramadan is a holy time for Muslims. It will be easier to establish stability during this holy month.
Turkish Foreign Minister Ahmet Davutoğlu will visit neighbouring Syria on Tuesday to "deliver a message" from Turkey, Prime Minister Tayyip Erdoğan said. Turkey, which until this year had close relations with Syria, has grown increasingly vocal in its criticism of President Bashar al-Assad's repression of a five-month-old popular uprising. Tensions were exacerbated in June when more than 10,000 Syrians fled across Turkey's southern border from Syrian forces trying to stamp out the protests. Most are still sheltering in Turkish refugee camps. President Abdullah Gül said on Tuesday he was horrified by Syria's armoured assault on the central city of Hama. "Our message will be decisively delivered," Erdoğan said on Saturday. "Syria is a domestic issue, because we share 850 km of border, we have cultural and historical ties and kinship. Therefore we cannot be onlookers to what is happening, but on the other hand we have to hear what they have to say, we are hearing them, and of course we have to do what is necessary". Assad sent an envoy to see Erdoğan in June after the Turkish prime minister had slammed acts of "savagery" that had forced thousands of Syrians to flee to Turkey.