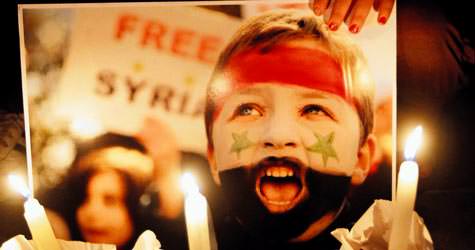 Turkey has demanded that Syria's leaders stop the killing of civilians and said Tuesday it would be watching events there in the next days, raising pressure on President Bashar al-Assad, who said his forces would continue to pursue "terrorist groups."

"Developments in the coming days will be critical, for both Syria and Turkey," Turkish Foreign Minister Ahmet Davutoğlu told a news conference in Ankara after returning from talks in Damascus. "Turkey's main and first aim is for the bloodshed to be stopped, and (for) an end to civilian deaths."
Syrian tanks pressed on with an armored offensive in the eastern city of Deir al-Zor, capital of an oil-producing province on the border with Iraq's Sunni heartland. Residents said snipers killed four people Tuesday as tanks thrust into main neighborhoods and roundabouts in the city.
Assad's forces also raided villages around the besieged city of Hama, broadening a 10-day offensive there, and stormed the town of Binnish near the border with Turkey, activists and residents said.
The Syrian National Organization for Human Rights said Syrian forces killed at least 30 civilians in the assaults, most of them north of Hama, including two girls aged 6 and 11 from the same family.
Davutoğlu said he had stated Turkey's expectations clearly in talks with Assad and other Syrian officials and had passed on a written message from President Abdullah Gül and an oral message from Prime Minister Tayyip Erdoğan to Assad.
Turkish leaders, who once backed Assad, have repeatedly urged him to halt the violence and make urgent reforms after street protests against his autocratic 11-year rule erupted five months ago.
"We hope that those steps that will stop the bloodshed will be taken," Davutoğlu said.
Assad, who described the uprising as a foreign conspiracy to divide Syria, said there would be no let-up in military action.
Syria "will not relent in pursuing the terrorist groups in order to protect the stability of the country and the security of the citizens," state news agency SANA quoted Assad as telling Davutoğlu.
"But (Syria) is also determined to continue reforms ... and is open to any help offered by friendly and brotherly states."
Washington expressed disappointment at Assad's latest comments and said U.S. Secretary of State Hillary Clinton expected to talk to Davutoğlu after his meetings in Syria.
"It is deeply regrettable that President Assad does not seem to be hearing the increasingly loud voice of the international community," U.S. State Department spokeswoman Victoria Nuland told reporters when asked about the comments.
She refused to comment directly on a 2009 U.S. diplomatic cable quoted by McClatchy newspapers last week describing Assad in unflattering terms, calling him "neither as shrewd nor as long-winded as his father" (former president Hafez al-Assad).
Rights groups say at least 1,600 civilians have died since the uprising against Assad erupted in March, making it one of the bloodiest of the upheavals sweeping the Arab world.
PEACEFUL TRANSITION
Neighboring Turkey has grown increasingly critical of the violence but earned a sharp rebuke Sunday when an Assad adviser said Syria would not accept interference in its affairs.
Davutoğlu said Turkey hoped for a peaceful transition in Syria resulting in the Syrian people deciding their own future.
The protests against Assad, whose ruling group are members of the minority Alawite sect, were inspired by Arab revolts which overthrew leaders in Egypt and Tunisia earlier this year.
Last week Assad sent troops and tanks to quell the mostly Sunni Muslim city of Hama in central Syria and the army launched a similar assault Sunday against Deir al-Zor.
Increasing the pressure on Assad, Sunni Muslim power Saudi Arabia issued a blunt warning that he risked turmoil unless he stopped the bloodshed and adopted reforms. Kuwait and Bahrain followed the kingdom in recalling their ambassadors.
The withdrawal of envoys left Assad with few diplomatic friends bar Iran. Western states have imposed sanctions on his top officials, while states with close ties to Damascus such as Russia and Turkey have warned Assad he is running out of time.
But no country has proposed military action such as that launched against Libyan leader Muammar Gaddafi.
Syrian authorities have denied that any Deir al-Zor assault took place. They say they have faced attacks since the protests erupted in March, blaming armed saboteurs for civilian deaths and accusing them of killing 500 security personnel.
State television broadcast footage Sunday of mutilated bodies floating in the Orontes river in Hama, saying 17 police had been killed in the central Syrian city.
SANA news agency said Monday the military was starting to pull out of Hama after helping to restore order. Residents said there were still tanks in parts of the city and security forces were arresting hundreds of people.
Activists say at least 130 people were killed in Hama, where Assad's father crushed an armed Islamist uprising in 1982, and one group has put the death toll at over 300.
Like most of Syria, Hama and Deir al-Zor are mainly Sunni cities, and the crackdowns there resonate with Sunnis who form the majority in the region and govern most Arab countries.