Erdoğan and Obama discuss Syria over the phone 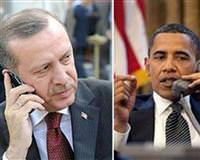 U.S. President Barack Obama paid a telephone call to Prime Minister Tayyip Erdoğan yesterday. The two leaders discussed regional issues and exchanged views on the developments in Syria and the danger of the mass starvation Africa is currently facing.

Discussion surrounding Syria constituted a significant portion of the telephone call. While Obama expressed curiosity of Erdoğan's views regarding the recent meeting held in Syria, when Foreign Affairs Minister Ahmet Davutoğlu arrived to deliver a message to Assad from Erdoğan and President Gül, both leaders agreed that the bloodshed in Syria must be stopped and emphasized that the violence directed at the public must come to an immediate halt. It was also brought up that the steps Assad takes in the next few days will be closely followed and a position will be determined accordingly.

A THANK YOU FOR SOMALIA
The Prime Ministry Press Center made the following announcement in regards to the discussion: "In reference to the developments in Syria, both sides have underscored the urgency of the situation, they expressed their deep concern of the Syrian government's use of violence against civilians and the importance of urgently meeting the public's demands for a transition to democracy. Both sides concur that it is necessary to continue closely following what steps the Syrian Administration takes."
During the conversation, the two leaders also discussed the humanitarian tragedy experienced in Africa. Prime Minister Erdoğan stated that he would be arranging a tour of Somalia and that the Western world should not forget about Africa. Obama thanked Erdoğan for his planned trip and his sensitivity to the issue. The announcement made by the Prime Ministry also stated, "The two leaders have reached a consensus to act in close collaboration on the tragic drought in Africa and to increase efforts to deliver aid to the region.'