'The knife is at the bone' 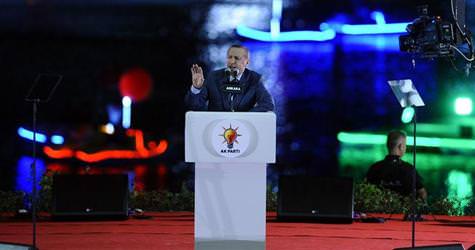 Expressing his discontent for the terrorist attacks taking place during the month of Ramadan, Prime Minister Erdoğan issued a final warning: “It will be very different after this Ramadan.”

The tenth anniversary of the founding of the AK Party was celebrated with a fast-breaking, or iftar, ceremony held in 81 different provinces. Speaking at the iftar held in Ankara with 20,000 people in attendance alone, Prime Minister Tayyip Erdoğan loaded on both the PKK and BDP. "They have killed three more of our children. I am speaking the truth by saying the knife is at the bone. We are being patient during the sacred month of Ramadan."
However after the end of Ramadan, which as we know is an era of peace, a month of solidarity, things will be very different… Those who do not distance themselves from separatist terrorist organizations are also in essence, participating in the crime. They will also be made to pay the price for this, and it will be high.
LOCAL AUTONOMY WHATEVER… PASS
"By going and forming an illegitimate parliament on their own, they will never be able to so much as perform an operation in any province in Turkey. Local autonomy… self-government… just pass... No other autonomy beyond the autonomy of our states' local administrators is up for debate.