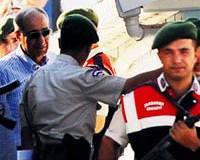 One of Turkey’s top generals appeared in court on Monday alongside several senior officers to face charges of plotting to overthrow the government in a trial that has deepened strains between the secularist military and the religiously conservative government.

The trial has shaken the foundations of Turkey's once all-powerful military, triggering the resignations last month of the country's top four commanders who quit in protest over the detention of their comrades.
General Bilgin Balanlı, head of Turkey's military academies who has been in prison since his arrest in May, is the highest-ranking serving officer among nearly 200 serving and retired officers charged with involvement in the alleged coup conspiracy known as "Operation Sledgehammer."
Their trial is a milestone on European Union candidate Turkey's journey of democratic reform, political analysts say.
In what was an often animated courtroom, friends and relatives of the accused applauded as the officers were led into the heavily-guarded court at a top security prison in Silivri, west of Istanbul. The hearing was closed to television cameras.
Relatives whistled in support when Balanlı dismissed the trial as an "ugly slanderous campaign" against the Turkish military, prompting the judge to briefly adjourn the hearing.
"This is not a circus," judge Omer Diken was quoted as telling the courtroom when onlookers whistled and clapped.
At one stage judge Diken ordered Balanlı to speak "without raising your voice" to which the four-star general replied that he wanted the whole courtroom to hear what he was saying and protested at being interrupted.
"I am the one leading this trial, I will interrupt. Speak without raising your voice," Diken was reported as saying to Balanlı.
After the indictment was read out, the defendants demanded the judges presiding over the trial be changed, a topic which would be discussed at a new hearing date on Oct. 3.
If convicted, the officers face jail sentences of between 15 and 20 years.