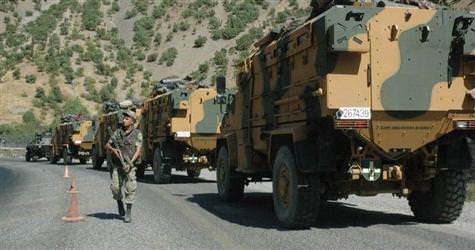 Turkish military operations in northern Iraq have killed some 90-100 PKK members since last week’s launch of artillery and air strikes against the terrorist group, the armed forces said on Tuesday.

The air strikes are the first against terrorists in the mountains of northern Iraq in more than a year and mark an escalation of the 27-year-old conflict after the collapse of efforts to negotiate a settlement.
In six days of cross-border air raids, Turkish warplanes struck 132 targets of the PKK, which uses the region as a base to launch attacks on Turkey.

The armed forces launched the operations on Aug. 17 in response to a surge in PKK attacks in southeast Turkey.
An army statement said definite figures on PKK casualties were not available but it had information that more than 80 terrorists were wounded in the operations, which hit 73 shelters, eight stores and nine anti-aircraft positions.

"According to initial information 90-100 terrorists were rendered ineffective," according to the General Staff, using an expression referring to the killing of militants. "The air and ground operations will continue," the military added.

The casualty figures could not be confirmed.

PKK terrorists have killed some 40 Turkish security personnel in just over a month. More than 40,000 people have been killed in the conflict since the PKK took up arms in 1984.