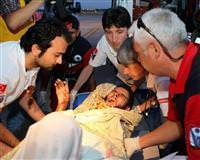 Yesterday 45 wounded in the conflict in Libya were brought to Turkey from Benghazi on a General Staff helicopter.

The wounded arrived to Istanbul last night at 19:15 and were transferred by ambulance and accompanied by personnel from the Ministry of Health to a series of medical school and research hospitals in Kartal, Pendik, Bağcılar and Baltalimanı.

'WE THANK YOU'
As the wounded Libyans were exiting the plane, they yelled out 'Turkey is the Best'. Arriving with a wound on his leg, Ibrahim Omar exited the plane holding a photograph of Prime Minister Recep Tayyip Erdoğan visiting him as he received treatment in Ankara earlier this year. Another Libyan who arrived to Istanbul seeking treatment states, We want to thank the Turkish government very much. May God bless them, they have helped us greatly. Believe that Turkey will establish good relations with the new Libya. May God be their servant."
Answering questions at the Atatürk Airport, the Istanbul District Department of Health Assistant Director Dr. Ercan Özgül stated: "There were a total of 45 male patients brought to Turkey, 27 of which were carried on stretchers, including one child. We have disbursed the patients to the hospitals they will be receiving treatment at and 18 attendants have also arrived to care for the patients."
FIRST FREE EID AL-FITR IN 42 YEARS
Meanwhile, for the first time in 42 years, 1,000's of Tripoli citizens conducted the Eid prayer in tears of joy at the Martyr's Square, formerly known as the Green Square.