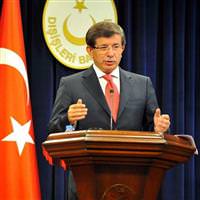 Turkey expelled Israel's ambassador and senior Israeli diplomats and suspended military agreements on Friday, the day after it emerged a U.N. report said the Jewish state had used unreasonable force in a raid on a Gaza-bound ship that killed nine Turks.

Stung by Israel's refusal to meet demands for a formal apology, pay compensation for families of the dead, and end the blockade of Palestinians living in the Gaza enclave, Turkey announced it was downgrading ties with the Jewish state further.

Turkey's reaction to the long-awaited report, which also declared that Israel's naval blockade of the Gaza Strip was legal, deepened Ankara's rift with Israel.

Israel's ambassador Gabby Levy was currently in Israel and canceled plans to return to Turkey on Thursday.

On Friday, Turkey went a step further by putting military pacts with its erstwhile ally on ice.

"All military agreements have been suspended," Davutoğlu added.

Davutoğlu said some of the report's findings were questionable and that Turkey did not recognize the legitimacy of the blockade of Gaza.

"Turkey will take all measures which it sees as necessary for freedom of navigation in the eastern Mediterranean," Davutoğlu said.
"Turkey does not recognize Israel's blockade of Gaza. It will secure the study of this blockade at the International Court of Justice. We are beginning initiatives to get the U.N. General Assembly moving (on this)," he added.

He also said support would be given to Turkish and foreign victims to seek justice from courts. One of the nine Turks killed was a U.S. citizen.

The report, prepared by a panel headed by former New Zealand prime minister Geoffrey Palmer, is expected to be formally handed to U.N. Secretary-General Ban Ki-moon later on Friday and officially released then.

The New York Times posted on its website on Thursday a copy it had obtained.