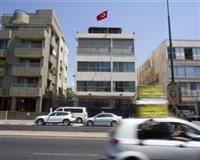 Turkey expelled Israel's envoy and froze military cooperation with the Jewish state on Friday after a U.N. report on the deaths of nine Turks in an Israeli raid on a Gaza-bound ship failed to trigger an apology.

Foreign Minister Ahmet Davutoğlu told reporters all diplomatic staff above the level of second secretary would be sent home by Wednesday and Turkey would freeze military pacts with its erstwhile ally.
"All military agreements have been suspended," he said.
Ankara also said it would seek to prosecute all Israelis involved in the May 2010 raid.
"Turkey will take legal actions against the Israeli soldiers and all other officials responsible for the crimes committed and pursue the matter resolutely," Turkey's embassy in Washington said in a statement.
The rift between Turkey and Israel comes despite U.S. efforts to encourage a rapprochement between two regional powers whose cooperation it needs to address changes sweeping the Middle East. Both countries share a border with Syria.
The U.N. report on the flotilla raid, prepared by a panel headed by former New Zealand prime minister Geoffrey Palmer, was formally handed to the office of U.N. Secretary-General Ban Ki-moon and published on Friday , U.N. spokesman Eduardo del Buey said.
Del Buey later said Ban had hoped the inquiry and report on its findings would bring Israel and Turkey back together and "deeply regrets the fact that this has not been possible."
Turkey was stung by Israel's refusal to make a formal apology and pay compensation to families of the dead after the U.N. report said on Thursday that Israel had used unreasonable force in its raid on the Gaza-bound ship.
Israel's ambassador Gabby Levy is currently in his home country and canceled plans to return to Turkey.
Israel said on Friday it accepted the findings of the U.N. report and hoped to mend ties with Turkey, but reiterated that it would not apologize for the deaths.
Immediately after the attack on the aid convoy, Turkey withdrew its ambassador to Israel, suspended joint military exercises, and barred Israeli military aircraft from Turkish air space.
Turkey's reaction to the report, which also declared that Israel's naval blockade of the Gaza Strip was legal, deepened a rift that broke wide open in 2009 after Prime Minister Tayyip Erdoğan lambasted then-Israeli president Shimon Peres in Davos over an Israeli offensive in Gaza.
Faced with the changes wrought by the Arab Spring, both Turkey and Israel are trying to adjust to the shifting political landscape. Erdoğan's stand on the Palestinian issue has held Turkey in good stead among Arabs agitating for greater democracy, notably in Egypt and more recently Syria.
"The Israeli government, which should analyze best what is happening in the Middle East, is completely lacking in strategy," President Abdullah Gül told reporters. "Turkey is seeking peace and stability. There are steps which Israel must take in the region to achieve peace and stability."
But Turkey has carefully avoided a complete breakdown in relations with Israel, stepping up diplomatic pressure in a calibrated fashion to leave open chances for a change of heart either by Israel's current coalition or a future government.
Israel responded with a statement on Friday saying it would work to resolve the dispute. It reiterated regret over the loss of life but made clear that no apology would be forthcoming.
"Israel recognises the importance of the historical ties in the past and present between the Jewish and Turkish peoples," an official Israeli statement said.
Both sides have benefited from military intelligence and cooperation in the past.
An Israeli official said ongoing defense deals include the upgrade by Israel of Turkish tanks and F-16 jets, as well as the sale of military drone aircraft.
"We are studying the implications of the Turkish announcement," the official said without elaborating on the value or prospects for those deals.
LEGAL CHALLENGES
Davutoğlu said Turkey would seek to raise the question of the blockade's legality at the International Court of Justice, "Turkey will take all measures which it sees as necessary for freedom of navigation in the eastern Mediterranean," he added.
Israel calls its Gaza blockade a precaution against arms reaching Hamas and other Palestinian guerrillas by sea. On Friday it urged Turkey not to challenge the blockade.
Palestinians and their supporters say the blockade is illegal collective punishment, a view some U.N. officials have echoed.
The Islamist Hamas movement controlling Gaza issued a statement supporting Turkey's expulsion of the Israeli envoy.
Davutoğlu also said support would be given to Turkish and foreign victims of the Israeli raid to seek justice from courts. One of the nine Turks killed was a U.S. citizen.
Both the Israeli and Turkish members of the four-man panel that wrote the report said they disagreed with key findings.
The report said Israeli commandos faced "organized and violent resistance from a group of passengers." It also said two Israeli marines suffered gun shot wounds, but stopped short of saying whether pro-Palestinian activists used firearms.
But in criticism of Israel, it said the amount of force used by the Israelis on board the Mavi Marmara, the largest in a flotilla of six ships that the crew said were delivering aid to Palestinians in Gaza, was "excessive and unreasonable."
Davutoğlu said the report cited evidence that most of those who killed were shot several times from close range.