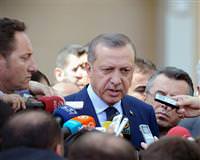 Turkey said on Tuesday it was freezing defense trade with Israel and stepping up naval patrols in the eastern Mediterranean, a sign of growing tension between the two major U.S. allies in the Middle East.

Prime Minister Tayyip Erdoğan's threat to send warships into waters where Israel's navy operates raises the risk of a naval confrontation between the two powers.
"The eastern Mediterranean is not a strange place to us. Aksaz and Iskenderun -- these places have the power and opportunity to provide escorts," Erdoğan told reporters in Ankara, referring to two Turkish naval bases. "Of course our ships will be seen much more frequently in those waters."
Relations with Israel began to unravel after Erdoğan voiced outrage at an Israeli offensive against the Gaza Strip, ruled by the Palestinian Islamist Hamas group, in late 2008 and early 2009. They worsened sharply last year after nine Turks were killed during an Israeli commando raid on an aid ship bound for Gaza.
Before that Turkey and Israel had worked closely together on military cooperation and intelligence sharing, as both had sought reliable partners in a volatile neighborhood.
Asked about Erdoğan's remarks, Israeli Deputy Prime Minister Dan Meridor said: "I'm sorry we reached this point. I hope that ultimately the anger will ebb and interests will prevail."
On Friday, Turkey announced it was expelling Israel's ambassador and other senior diplomats, downgrading relations after the release of a U.N. report on the killing of the Turks, who aimed to break Israel's naval blockade of Gaza.
Israel's refusal to apologize for the deaths has angered Turkey, a NATO member with the bloc's second biggest military.
And Turkey has also taken issue with the U.N. panel's conclusion that Israel's blockade is a legitimate measure to stop weapons reaching Hamas militants in Gaza, an impoverished, densely populated enclave of two million people.
Erdoğan, who accused Israel of acting like "a spoiled boy" in the region, said Turkey was preparing more sanctions against Israel, and that defense industry ties would be frozen.
"Trade ties, military ties, regarding defense industry ties, we are completely suspending them. This process will be followed by different measures," Erdoğan said.
An official at Erdoğan's office told Reuters the prime minister was referring to military and defence trade ties only, not overall trade, which last year reached a total bilateral volume of $3.5 billion.
According to the Stockholm International Peace Research Institute, which monitors arms sales worldwide, Israel delivered 170 rebuilt Turkish M-60A1 tanks to Turkey in a $688 million deal between 2005 and 2010. It also sold 10 Heron drones to Turkey in 2010 for $183 million.
CYPRUS GAS DEALS
Israel has expanded patrols in the eastern Mediterranean to enforce the Gaza blockade it says is needed to prevent arms smuggling to Hamas and deter any Lebanese Hezbollah militant attack on gas platforms.
Israel's Transport Minister Yisrael Katz, a member of Netanyahu's security cabinet, said the Jewish state was determined to enforce the blockade "using the means at its disposal".
Turkish media said Erdoğan held a meeting with Turkey's chief military commander, General Necdet Özel, on Tuesday to discuss developments with Israel.
Some Turkish and Israeli commentators have suggested Turkey might use the feud with Israel to build up naval patrols in seas between the Jewish state and the divided island of Cyprus.
Turkey has bitterly complained about recent Cypriot-Israeli energy deals. The presence of Turkish ships would have a menacing effect and could be seen as a provocation by neighbouring Greece, also a NATO member.
Noble Energy, a U.S. firm, is due to start exploratory drilling for natural gas off Cyprus in October despite warnings from Turkey against such concessions.
Turkey and Cyprus have been at odds for decades over the ethnically split island, whose internationally recognized Greek Cypriot government is an EU member. Turkish Cypriots live in a breakaway state in northern Cyprus recognized only by Turkey.
Asked about exploratory drilling for natural gas by Greek Cypriots, Egemen Bağış Turkey's European Union Minister, told Turkish media last week: "It is for this (reason) that countries have warships. It is for this (reason) that we have equipment and we train our navies."
Greek Defense Minister Panos Beglitis, on an official visit to Israel on Tuesday, said: "We are at a time when calm must prevail on all sides in the region. This is not a time for conflicts and clashes."
Erdoğan will visit Egypt on Sept. 12-14 to discuss political coordination and economic ties, an Egyptian government official said on Tuesday. Some media reports had suggested Erdoğan would travel from Egypt to Gaza, but the Egyptian official said he did not expect such a trip to take place.
Erdoğan will also attend the U.N. General Assembly in New York later this month where he is likely to give strong backing to Palestinian efforts to win U.N. recognition for a state they aim to create in Gaza and the Israeli-occupied West Bank.