Era of 'ruling through fear’ is over 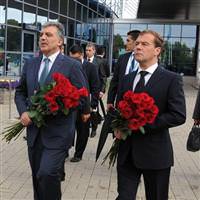 Speaking as the ‘guest of honor’ at the 3rd Yaroslavl Global Policy Forum, Gül stated that he perceived the recent Arab Spring uprising to be comparable to the 1848 and 1989 revolutions.

Addressing the Yaroslavl Global Policy Forum on "The Modern State and Social Diversity in the Age of Globalization" President Abdullah Gül delivered a series of messages to the Middle East's remaining oppressive administrations in light of the Arab Spring uprisings knocking on the door.
Warning that "the era of ruling through fear or pressurizing the public is almost over," President Gül went on to deliver the following messages at the forum as Russian State Leader Dimitri Medvedev's special guest.
TURKEY'S EXPERIENCE
"Turkey as the cradle of civilizations and home to multi-religious, multiethnic and multicultural empires for centuries embodies vast experience in social diversity. In fact, the effort for modernization based on plurality and democracy that began 200 years ago for the Turkish people has gained greater momentum and impact in the last 10 years through deep-rooted reforms in the political and economic area. The main purpose of these reforms has been to raise the living standards of our people and to promote social cohesion.
Through the work that has been done, the channels for public dialogue between the "state which represents" and the "people who are represented" were broadened and the state provided for security by ensuring peace and prosperity for its people.
We are aware of the fact that there are still steps we need to take in order to broaden the scope of our democracy, raise its standards to a competent and mature level and increase democratic participation. In fact, the result of the elections on June 12th is a manifestation of the social aspiration on all parts of society for a new constitution based on freedoms that will put Turkey into the next century. In parallel with Turkey's rising political and economic power and democratic standards, its ability to pursue a more active and effective foreign policy in the international arena has grown.

We believe that developments in human rights and democracy will play an important role in ensuring peace, development and social justice and base our policies on this understanding. We believe that the movements for change and democratic transformation that began at the beginning of this year in North Africa and spread rapidly to other countries in the Middle East are similar to the revolutions in 1848 and 1989. We are of the opinion that the region is on the brink of a historic turning point towards transitioning to a democratic modern state model. With this understanding, Turkey supports the legitimate demands of the people for reform in the region and works to ensure that this historic transformation which will resonate on a global scale is translated into peace, stability, order and prosperity.
The values of democracy, rule of law and respect for human rights that I speak of have originated in Europe, but had a global impact. The Arab Spring that began with the demand of the people for democratic transformation is the latest manifestation of this impact. One expects a decline in discriminatory treatment as the world experiences these developments and the emergence of a common cultural understanding for mankind, but we unfortunately continue to witness the strengthening of extremist views that consider differences as a reason for conflict in various parts of the world.

The reflection of these movements in the European continent which presented the world with the notions of democracy and the modern state is food for thought. Racism, Islamophobia and xenophobia that fester contemporaneously with the economic crisis affecting Europe give rise to serious concern.

Parties that point at migrants as the source of problems such as security, crime, poverty and other social difficulties gain more votes. The reaction by governments and main political parties that introduce stricter measures on migration in order to counter this fear by the people is also worrying. Rising intolerance and discrimination becomes a trigger for radicalization. The emerging divide between religious, racial and cultural communities has begun to damage the social fabric of our societies. If this tendency cannot be checked, our world will become a much more dangerous place to live.

In this context, there is merit in carefully considering the attack by a Norwegian citizen targeting Norwegian democracy which gets its strength from multiculturalism. This atrocious attack shows that terrorism and extremism are not confined to a specific religion or geography and clearly shows that extreme right wing ideologies that gain greater support in Europe constitute a serious security risk.
I am sorry to say that whenever we have expressed our concerns with regard to right-leaning movements to our counterparts in the past, we observed that they turned a blind eye to this matter due to domestic political reasons. This is also because it requires greater effort to treat and overcome recurring ailments such as racism and xenophobia in the West than address the problems in the East which are mostly due to underdevelopment."
'MISSILES ARE FOR DEFENSE PURPOSES'
Returning to Istanbul in the evening hours last night, President Gül, responded to question by the press at the Atatürk Airport. Gül stated, "This missile system is intended for defense purposes and to be used against weapons. We are already consulted on the issue with Russia whom as you know is a strategic NATO partner."
ROSES IN REMEMBRANCE OF RUSSIAN HOCKEY TEAM
Gül and Medvedev met one on one for 30 minutes at the Arena-2000 International Cultural and Sports Center, which also hosted the forum. After the two leaders attended a special dinner, they played bouquets of red roses in an area designation in front of the complex in honor of the lives lost in the Yaroslavl Lokomotif ice hockey team.