No plans "for now " for Gaza convoy 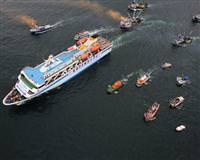 The Turkish charity behind last year’s sea convoy to Gaza in which nine activists were killed during an Israeli raid said on Friday it had no plans for now for another flotilla, a day after Turkey warned its warships would escort future missions.

Raising the stakes in Ankara's row with Israel over its refusal to apologies, Prime Minister Tayyip Erdoğan said on Thursday Turkish vessels would escort aid ships to Gaza and would not allow a repetition of last year's raid.
Asked about any plans to organize flotillas in the future, Serkan Nergis, a spokesman for IHH, the Turkish Islamic charity, told Reuters: "Right now we are trying to resolve technical problems with the Mavi Marmara ferry. We are still collecting aid for Gaza, we will find a way of sending this to Gaza, but we don't have a specific plan for a second aid flotilla."
All nine activists died aboard the Mavi Marmara, which led the convoy that tried to breach Israel's blockade.
The incident and subsequent diplomatic arguing has brought relations between Turkey and Israel, once close Middle Eastern allies, almost to crisis point.
A senior Israeli official on Friday called Turkey's announcement that warships would guard any future convoys to the Gaza Strip as "harsh and serious" but said Israel wanted to avoid a war of words with its former ally.
Turkey, a NATO member, has downgraded diplomatic relations with Israel and Erdoğan said it would boost naval patrols in the eastern Mediterranean.
The Jewish state has said it will continue to enforce the blockade, which a United Nations inquiry deemed a legitimate security measure to prevent weapons-smuggling.