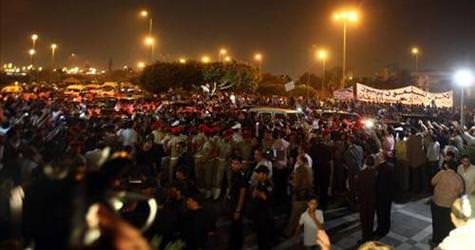 Arriving late last night, Prime Minister Erdoğan was greeted in Cairo by crowds of Egyptians that had been awaiting his arrival for hours, holding up signs stating ‘the hero of his second country Egypt’…

Announcing that he will not be visiting Gaza during this trip, Erdoğan states, "I am yearning to go as soon as possible however." Erdoğan also expressed his plans to speak to the Arab League and stated that the entire world would hear his messages alongside with our Egyptian brothers.
Erdoğan was greeted by a cheerful crowd upon his arrival to Egypt, the first stop on this critical 'Arab Spring' tour. Thousands of Egyptians came out to the airport hours early to greet Erdoğan carrying signs, flags and singing songs.
Erdoğan did not disappoint and made a short address in Arabic upon request by the thousands of Egyptians that had come out.

Thousands of Egyptians lined the road to watch Erdoğan pass and displayed sentiments of love. Erdoğan was greeted upon his arrival by Prime Minister Essam Sharaf. Joining him on this trip is his wife Emine Erdoğan, his son Bilal, his daughter Sümeyye Erdoğan as well as AK Party Assistant Chairman Ömer Çelik and AK Party Group Deputy Chairman Nurettin Canikli.

Erdoğan provided a number of details regarding his trip at a press conference held prior to his departure. When one journalist asked whether Prime Minister Erdoğan would be going to Gaza in addition to his scheduled visits to Egypt, Tunisia and Libya, Erdoğan responded by stating that he would not be visiting Gaza during this trip, however he is yearning to go as soon as possible.

When asked whether he would be giving a speech in Tahrir Square, Erdoğan responded by stating: "I will be making an address at the Arab League, which is located right near Tahrir Square. If I were to give an address at Tahrir Square it could lead to some sort of provocation. We are of course not holding these meetings and addresses to jeopardize Egypt's future and in line with Egypt's new transformation and period of change our address at the Arab league will be widely televised. Along with our Egyptian brothers, the entire world will be following the messages we will be delivering.

When Erdoğan was asked the question; "You stated that the raid on the aid flotilla to Gaza was a cause for war. If a similar situation arises, what will Turkey's stance be? Erdoğan responded by stating, "No one has the authority to intervene in such a matter, no matter where it is we decide to deliver humanitarian aid. Israel may have committed such an atrocity. Now they face paying the price for such an error. Turkey's issue is not at all with the Israeli public nor with the Jews that live in our own country. Turkey's problem is with the contradictory Israeli administration. And, as long as Israel's refrains from apologizing or paying compensation to the victims' families and refuses to lift the blockade on Gaza they should not expect relations with us to normalize."

THREE COUNTRIES, ONE MESSAGE: WE ARE BY YOUR SIDE
During the press conference Erdoğan also stated: "We share a common history with Egypt. In terms of the stability of our region this is a critical country in the Eastern Mediterranean. We will show that we are prepared to provide every form of support to our comrade and brotherly nation Egypt during this critical and difficult time."

Erdoğan revealed that during his visit he would by meeting with the Egyptian Prime Minister Essam Sharaf, the Supreme Military Council Chairman and Minister of Defense Mohamed Hussein Tantawi as well as with a committee of young leaders that played a part in the Tahrir Revolution. Erdoğan stated that he would be moving on to Tunisia on September 14th where he will meet with Vice President Fuat el Mebazza, Prime Minister al Bacı Kaid El Sebsi as well as leaders from the main political parties. Noting that he will be moving on from there to Libya, Erdoğan stated, "I will be meeting with the Mustafs Abdul Jalil the president of the National Transitional Council which we recognize as being the sole representation of the Libyan public as well as other authorities. I will therefore be delivering the message that we will continue to increase political and financial support to the National Transitional Council.'