An aria from Erdoğan at the Arab opera 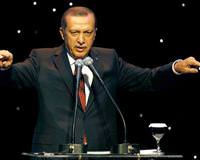 The second to make a global call at the historic opera building in Cairo, Prime Minister Erdoğan delivered a series of significant messages: Instead of resisting change, be its initiator…

Prime MInister Tayyip Erdoğan first delivered a speech at the Arab League Council of Ministers and then went on to address the global public, stating the following:
FREEDOM: This message of freedom, which began in Tunisia and then, wave by wave, moved on to Tahrir has now surpassed Tripoli, Damascus, Sana and Bahrain to become a source of light for the oppressed.
CHANGE: Our message delivered all the way to Tunisia, Egypt and Syria is clear: Instead of resisting change, be its initiator, give it direction.
TO ASSAD: The Syrian public no longer believes in Assad. Nor do I. A leader who massacres his public loses all legitimacy.
TO ISRAEL: There is nothing Israel can say in the name of peace in this world. We have no issues with the Israeli public.
TO THE USA: I would like to remind them to revisit the announcement made recently in regards to the step the UN is about to take for Palestine.
TO EGYPT: It is crucial to hold timely elections. Democracy and freedom is as much the right of you my brothers as is water and bread.
TO PALESTINE: Come, lets raise the longed for Palestinian flag at the United Nations.
TO LIBYA: We are not like others who are calculating Libya's underground resources.
TO THE U.N.: If they continue to give credence to Israel's caprices, they will then become perpetrators in their crimes.