Erdoğan hailed as a new champion for Arabs 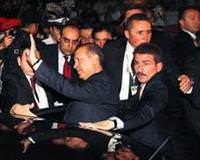 "Welcome, welcome, Erdoğan," they chanted as he left the headquarters of the Arab League.
The hero's greeting may well have surpassed Erdoğan's own expectations as he set out on a tour of Arab countries aimed at asserting Turkey's role as a leader in a turbulent region.
Much of his new found popularity, especially with the Arab public, is probably due to his confrontation with Israel.
"We can learn from him how to deal with the enemy ... So many things done by Israel, but we stayed silent," said Rabab Abdel-Khalek, a university student who was waiting to attend a speech by Erdoğan in which he would outline his Middle East vision.
It may also reflect Turkey's growing economic might and its success in developing a unique poetical system that mixes Islamism and democracy. It is one that Egypt, and other countries where popular uprisings have toppled long-ruling strongmen this year, might wish to emulate.
"We wish Cairo could go through the same modernizing transition that Erdoğan made happen for Turkey. We want Egypt to undergo the Turkish experience," said Hassan Abdel-Fattah.
But the public accolades were not necessarily a sure thing.
Turkey is a Muslim country but its people are not Arab. Its Ottoman Empire ruled large areas of North Africa and what is now called the Middle East for centuries until the end of World War One.
Until recently, its foreign policy was focused on becoming closer to Europe and closely aligned to the United States' strategic interests. It was keen to join the European Union and disdainful of a "backward" Middle East on its doorstep.
But feeling jilted by the EU and less crucial to Nato defences since the Cold War ended, Erdoğan has sought friends and markets in the Middle East.
"The popular reception reflects the appreciation of a large sector for Turkish foreign policy and it shows how weak Egyptian diplomacy has been under (ousted leader Hosni) Mubarak and since then," said Nabil Abdel-Fattah, political analyst at Al-Ahram Centre for Political and Strategic Studies.
Whither Obama?
Many Arabs are frustrated at what they see as the one-sided policies of the United States towards Israel.
Turkey has been hailed for its tough line against Israel, first over the Gaza offensive of 2008 then over its attack on a Gaza-bound Turkish ship that killed nine people last year.
Ankara demanded an apology and when Israel refused, it expelled the ambassador.
Egyptians are angry their new government did not do the same when five border guards were killed by Israeli forces chasing cross-border raiders last month. Cairo said it would withdraw its ambassador but did not.
Erdoğan's star status also contrasts with the slump in popularity of US President Barak Obama, who came to Cairo in in 2009 seeking to restore Washington's reputation with Muslims after two wars in Iraq and Afghanistan under his predecessor George W. Bush.
Two years on, many see his speech as a list of broken promises.
"We are sure Erdoğan will achieve what Obama didn't achieve. Why? Because Obama just makes promises but he follows the policies of the US Congress," said 26-year-old Ayman Soliman Mahgoub.
Obama had said in 2009 that the United States would not turn its back on the Palestinians' hope for an independent state.
But Washington now says it will veto a Palestinian plan to seek recognition for a state at the United Nations this month.
In contrast, Erdoğan is championing the Palestinian cause.
At the Arab League on Monday, he said it was time to "raise the Palestinian flag".
Later in a speech at the Cairo opera house complex, he said the United States should reconsider its position.
"This prejudice is not befitting to the foreign policy of a country like the United States," he said.
Responding to the address, 34-year-old engineer Ahmed Youssef said: "Excellent speech! I wish we could have someone like him, an Egyptian, to lead the country, someone who speaks with the same mentality, same power, same confidence."