Erdoğan throws weight behind Arab cause 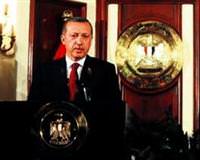 Prime Minister Tayyip Erdoğan told Arab states on Tuesday it was time to raise the Palestinian flag at the United Nations and accused Israel of obstructing peace in the Middle East.

Erdoğan, addressing Arab foreign ministers in Cairo at the start of a Middle Eastern tour, said backing a bid for recognition of a Palestinian state at the United Nations later this month was "not an option but an obligation" for Arab states.
He accused the United States, a close ally of Israel whose relations with Turkey have been frayed in recent months, of demonstrating prejudice in opposing the move as a potential irritant in a volatile area.
"While Israel is trying to secure its legitimacy in our region on one hand, it is taking irresponsible steps which unsettle its legitimacy on the other," Erdoğan said.
Erdoğan's recent criticism of Israel has drawn strong support in the Arab world, buttressing his campaign to promote Ankara's democracy as a model for movements that have toppled several Arab autocrats, including Egypt's former president Hosni Mubarak.
At a speech at a Cairo opera house later on Tuesday to set out Turkey's vision for the Middle East, Erdoğan said popular uprisings jolting Arab nations were a "light of hope" for the oppressed.
"Democracy and freedom is as basic a right as bread and water for you, my brothers," Erdoğan said in a speech interrupted several times with standing ovations and chants of "Erdoğan, Erdoğan! and "Allahu Akbar!" (God is Greatest)
In another swipe at Israel he said its government's mentality was "inhumane and lacks all legal basis."
"Every Jewish settlement is a wall that blocks peace. We hope that the Israeli people are aware of the walls of isolation their government builds around them," he said.
Israel's offensive against Gaza in 2008 largely spelt the end of a close alliance between Turkey and Israel, but ties nose-dived last year after nine Turks were killed in an Israeli raid on a ship heading for the Palestinian enclave, controlled by the Islamist group Hamas and under blockade by Israel.
POPULIST TOUCH
Erdoğan's tour will include Tunisia and Libya, which have all witnessed the fall of entrenched leaders to grassroots revolts this year, challenging the old order across the region.
Displaying a populist touch, Erdoğan stopped as he left the Arab League headquarters in Cairo where he had been speaking and shook the hands of demonstrators demanding change in Syria, whose military is trying to crush an uprising.
"It's time to raise the Palestinian flag at the United Nations," he told the Arab ministers. "Let's raise the Palestinian flag and let that flag be the symbol of peace and justice in the Middle East."
Palestinians will bid for full membership of the United Nations later this month, a move opposed by the United States, which has a veto. Arab states endorsed it at the Cairo meeting, where Erdoğan accused the United States of bias.
"The United States should reconsider the statement it made in relation to the bid Palestine is going to make to the United Nations. This prejudice is not befitting to the foreign policy of a country like the United States," he said.
Erdoğan said Turkey offered help to Arab nations facing turmoil but, in an apparent reference to Syria, he said some had turned down the offer. "However, we continue to insist they meet their people's demands."
Arab League Secretary-General Nabil Elaraby introduced the Turkish prime minister saying: "All the Arab peoples appreciate what you are doing. We consider that there is a strong friendly state who is always standing on the side of justice."
Outside the League, Syrian protester Samer Zaher, 30, said: "Erdoğan has turned into an Arab hero ... We have not found a leader as powerful as him addressing (Syrian President Bashar al-Assad) and asking him to quit."
Erdoğan later addressed the Syrian issue directly, saying in a public speech before several thousand Cairenes that he like most Syrians had lost faith in Assad.
"As civilian deaths increase in Syria we see that reforms have not materialized and they did not speak honestly. It is not possible to believe this. And the Syrian people do not believe in Assad, nor do I. We also do not believe him," he said in the grounds of the Cairo opera house.
WINNING OVER ARABS
While winning over ordinary Arabs, particularly with non-Arab Turkey's tough line toward Israel, Erdoğan's growing popularity and clout could be a headache for more cautious Arab leaders who could see their own influence overshadowed.
Egypt has traditionally seen itself as the leading diplomatic player in the Arab region. But its position has been eroded by wealthy Gulf countries, such as Qatar, and lately overshadowed by Turkey, with its fast-expanding economy.
Erdoğan met Egypt's Field Marshal Mohamed Hussein Tantawi, who heads the military council that took over after Mubarak was ousted by mass street demonstrations in February.
Egypt's generals have faced popular criticism for not taking a firmer line with Israel after it shot dead five Egyptian border guards in repelling cross-border raiders it said were Palestinian militants. Cairo said it would expel Israel's ambassador but did not follow through with the threat.
Protesters attacked Israel's embassy in Cairo last week, prompting the ambassador to fly home and an embarrassed Egyptian government to affirm to Washington, its major aid donor, that it remained committed to a 1979 peace treaty with Israel.