A tale of two speeches in the Egyptian capital 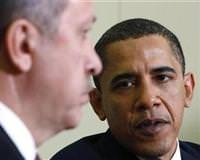 It was no surprise that Turkish Prime Minister Tayyip Erdoğan and U.S. President Barack Obama both chose Cairo to deliver their vision for the Middle East.

The historic Egyptian capital is home to al Azhar mosque and university, Islam's most prestigious seat of learning, lending authority to the words of any visiting leader anxious to influence Arab opinion.
Erdoğan was given a hero's welcome by Egyptians waving Turkish flags. His speech was interrupted by cheers in stark contrast to the reception given two years earlier to Obama, who was flanked by tight security and listened to quietly.
But since Egyptian president Hosni Mubarak was toppled by a popular uprising in February after 30 years in power, the choice of venue is even more compelling.
"Obama, no matter how good his intentions, is restrained by certain policies. He can't govern America based on his intentions. There are leaders and lobbies," said Hisham Saleh, in a reference to what Arabs see as Israeli influence on U.S. policy.
"Erdoğan's history proves that he is a man of his word," said Saleh, 26, who listened to Erdoğan in Cairo's opera house complex on Tuesday evening.
Both leaders' messages were similar -- justice for the Palestinians and democracy for oppressed Arabs -- but the reception was different.
"Democracy and freedom is as basic a right as bread and water for you, my brothers," Erdoğan said. Obama talked of the need for "governments that reflect the will of the people."
But ordinary Egyptians embraced Erdoğan in a way they could never welcome a U.S. president, even one like Obama who in June 2009 was still relatively fresh from an election victory and who promised change at home and abroad.
"I wish we could have someone like (Erdoğan), an Egyptian, to lead the country, someone who speaks with the same mentality, same power, same confidence ... Obama did not fulfil his promises," said Ahmed Youssef, a 34-year-old engineer.
Erdoğan has been lionised by Arabs for taking a stand against Israel. Many Egyptians have been impressed by Turkey's decision to expel the Israeli ambassador after nine Turks were killed last year in an Israeli raid on a Gaza-bound flotilla.
Egyptians wanted a similar tough line from their ruling generals after last month's shooting of five Egyptian guards when Israeli forces were chasing cross-border raiders. No such action was taken.
Erdoğan referred to "Israel's illegitimate and inhumane policies," a phrase in his speech that was guaranteed to please his audience. Erdoğan could never have made such a speech under Mubarak, who pursued peace with the Jewish state.
"I think Egypt as a state is still wary of the Turkish role in the Middle East and the profile Turkey is taking. But obviously the public is enamoured with this new path," said Ezzedin Choukri-Fishere, international relations professor at the American University in Cairo.
Yet, some of those who listened to Obama and Erdoğan felt the same frustration with both, namely that their hopes and aspirations were pinned on a leader who was not Egyptian.
"What made me sad is that in both visits the Egyptian people were always hopeful of promises and salvation from someone other than the Egyptian president, another leader," said researcher Ayat Hanafy, 22.
"The hails and cheers we heard, I hope one day we can hear them for an Egyptian leader," she said.