A Muslim can lead a secular state 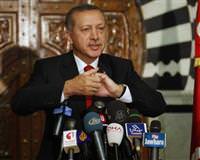 Tunisia's new political order will show that Islam and democracy can co-exist just as they have in Turkey, Turkish Prime Minister Tayyip Erdoğan said on Thursday.

Erdoğan, in Tunis on the second stop of a North African tour aimed at asserting Ankara's growing regional influence, said secularity should guarantee that people of all beliefs, as well as atheists, were treated fairly.
He said there was nothing to stop a Muslim from governing a secular state,
Tunisia plans to hold elections on Oct. 23 to select an assembly to rewrite the constitution, nine months after the revolt that swept away President Zine al-Abidine Ben Ali and sparked uprisings around the Arab world.
Islamist party Ennahda, banned for two decades under Ben Ali, is expected to poll strongly, unnerving Tunisian secularists.
Erdoğan said the country should have nothing to fear from the influence of Islam in politics.
"The most important thing of all and Tunisia will prove this; Islam and democracy can exist side by side," he told a joint news conference with Tunisian caretaker Prime Minister Beji Caid Sebsi.
"Turkey, as a country which is 99 percent Muslim, does this comfortably, we do not have any difficulty. There is no need to hinder this by putting forward different approaches. In the broadest sense, consultation will put forward the will of the people," he said.
More than 90 political parties have sprung up in Tunisia since Ben Ali's fall. Ennahda is seen with around 20 percent in the polls.
Erdoğan has been holding up Turkey's blend of Islam and democracy as a model for the movements which have toppled entrenched Arab autocrats in Tunis, Cairo and Tripoli.
"On the subject of secularism, this is not a secularism in the Anglo Saxon or Western sense, a person is not secular, the state is secular," Erdoğan said.
"A Muslim can govern a secular state in a successful way."
After Erdoğan received a rapturous welcome in Cairo this week, hundreds of Tunisians turned out to greet the Turkish premier at Tunis airport late on Wednesday, clutching portraits of him and hoisting banners reading "Welcome Erdoğan!"
Ennahda leader Rachid Ghannouchi joined the crowds, praising Erdoğan as someone who had "worked hard for Islam".
Ennahda, a moderate Islamist movement which has close ties with Erdoğan's AK Party, has said Turkey's political model is something it aspires to.
Erdoğan completes his tour in neighboring Libya on Friday.