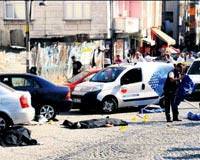 Three Chechens, one of them closely linked to Russia`s most-wanted militant leader, were buried on Monday after they were shot dead in Istanbul last week, an advocacy group said.

Turkish police launched an investigation to find who was behind the killing, media reports said, after an Istanbul-based advocacy group blamed Russian special services for the shooting.

Hundreds of people gathered at a mosque on Sunday for the funerals of the three men, who were gunned down in broad daylight on Friday on a suburban street in the Turkish city.

The three were shot dead in 15 seconds by 11 bullets fired from a pistol fitted with a silencer, Istanbul police have declined to comment on the case.

According to kavkazcenter.com, a website affiliated with the Islamist insurgency in the North Caucasus, one of the three dead Chechens, Berg-Hadj Musayev, was a close associate of Russia`s top rebel Doku Umarov.

Imkander, a Caucasus support association in Istanbul, pointed the finger at Russian intelligence.

"Russian intelligence, which previously brutally killed... Chechen commanders in Turkey in the same way, has added another link to the massacres with the murders carried out in the middle of Istanbul," its head Murat Ozer said in a statement.

Ozer was referring to the 2009 killing of three former Chechen rebel commanders in Istanbul.

Today`s Islamist insurgency in Russia`s North Caucasus, which aims to create a separate Islamic state across the region, is led by the Chechen-born Umarov, Russia`s most wanted man.

The United States has offered a $5 million reward for information leading to his arrest.

Umarov claimed responsibility for a suicide bombing at Moscow`s Domodedovo airport that killed 37 people in January, as well as the twin metro attacks last year that killed 40.

Umarov`s brother lives in Turkey, a country close to the Caucasus where Islamist militants from Russia are known to have found refuge.

Chechnya`s Kremlin-backed leader Ramzan Kadyrov has repeatedly spoken of his wish to "eliminate" Umarov, whom he blames for threatening the Muslim republic`s fragile peace.

Chechnya has been rebuilt by Kadyrov after two wars against separatist rebels, scarred by Soviet-era deportations and poverty. But rights workers blame him for leading a violent crackdown on his opponents.
Last Update: Sep 20, 2011 1:58 pm
RELATED TOPICS